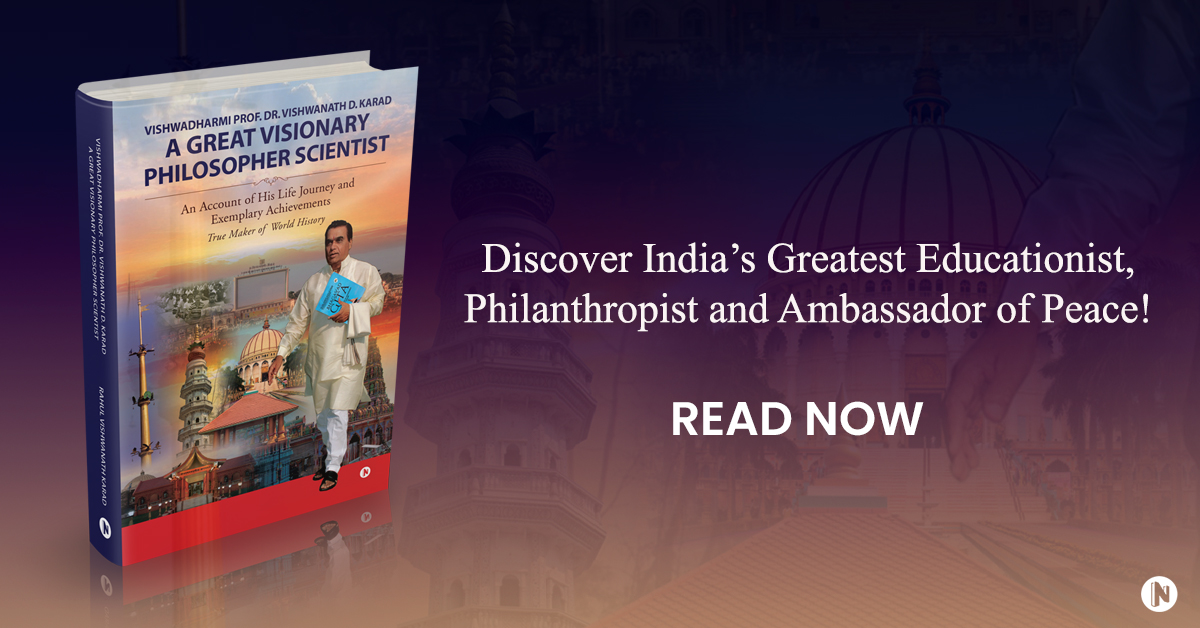 “The visionary starts with a clean sheet of paper and re-imagines  the world.” ― Malcolm Gladwell – Journalist, Author, and Public Speaker

Vishwadharmi Prof. Dr. Vishwanath D. Karad – A Great Visionary Philosopher Scientist is about  Dr. Vishwanath Karad, an eminent educationist thinker, a devoted teacher, a dedicated social  worker and a man of great vision who is solely committed to the development of technical  education and the cause of raising the qualities of life of the Indian masses for the betterment  of tomorrow.

Dr. Vishwanath Karad, with his rich knowledge and wisdom, appropriately understood the need  for establishing unaided engineering colleges to cater to the demands of a rapidly growing India  as early as 1981. In fact, he was pivotal in pioneering the way ahead.

Today, India produces close to 1.5 million engineering graduates across a wide variety of  disciplines every year, and a majority of these graduates hail from unaided institutions across  the country. This is a clear testament to Dr. Karad’s vision.

Dr. Vishwanath D. Karad is a fine example of a true multi-dimensional personality prominent in  Education, Social and Cultural activities for the well-being of Mankind, Environmental  Improvement and Pollution Control, Research and Development, Peace Studies, Promotion of  Human Rights Education, Village Development Programmes, Mass Education, Healthcare  Programmes, Religious Harmony and much more. He has been a champion to promote  Interfaith, Universal Brotherhood and Understanding, through Value Based Education and Training of students, and the society at large. He makes them realize the role of science and  spirituality in establishing a peace-loving holistic society.

He has been felicitated and decorated with a staggering number of awards and accolades in his  decades of dedication to his noble cause of spreading education, peace and spirituality in far flung areas around India.

In this book, his passion and hard work are celebrated by esteemed luminaries of our society  through means of heartfelt testimonials – that is bound to inspire the reader!

Author Rahul Vishwanath Karad is an Enterprising Educationist at the forefront of the 72  institute, 55000 student strong MAEER’S MIT Group of Institutions, Pune. He is the Executive  President of MIT World Peace University, Pune, India. This commitment of his has resulted in  the founding of the MIT School of Government, the first institute of its kind in Asia, which is  committed to strengthening the fabric of Indian Democratic Leadership.

His underlying belief in the democratic process and his faith in the youth of the country has led  him to found the leading Indian platform for students interested in politics and development of  the country, the “Indian Student Parliament” (Bharatiya Chhatra Sansad). A roaring success,  every year upto 12,000 politically and socially active students from about 450 universities  across 29 states of India, participate in the annual conclave.

Vishwadharmi Prof. Dr. Vishwanath D. Karad – A Great Visionary Philosopher-Scientist has been facilitated and edited by him.

Experience an inspiring and insightful compilation of well-edited testimonials that attest to the dedication and contributions of Dr. Vishwanath Karad to the field of education. Grab your copy  of Vishwadharmi Prof. Dr. Vishwanath D. Karad – A Great Visionary Philosopher Scientist in

print and e-book format at the Notion Press Bookstore and amongst leading e-commerce portals such as Amazon and Flipkart.