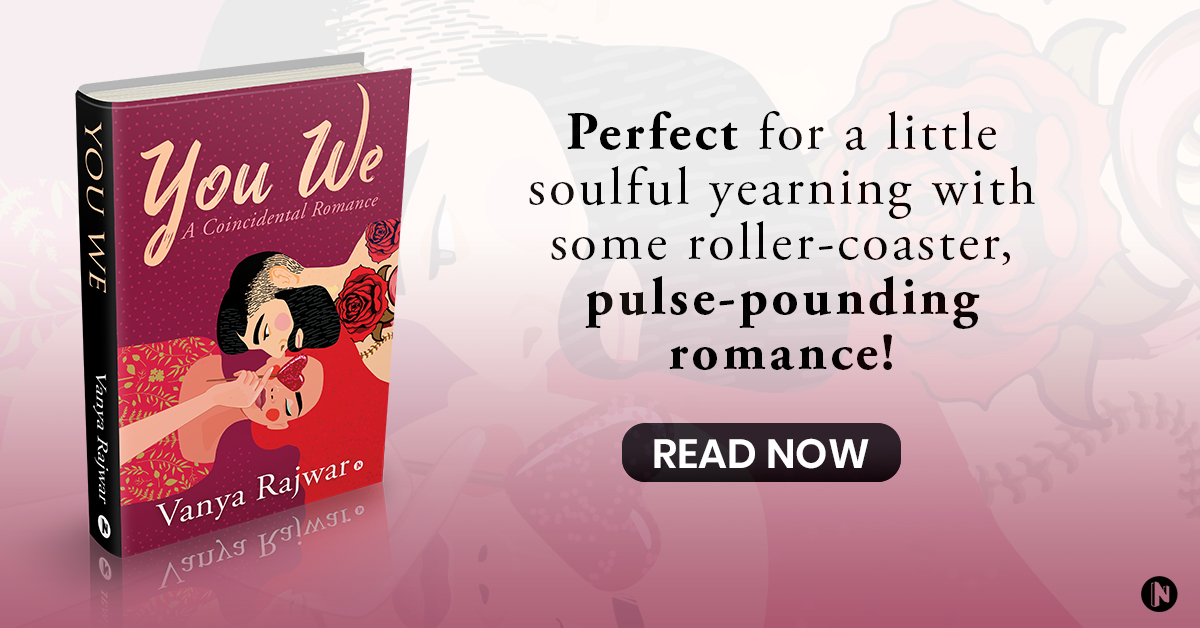 A deep husky bass greeted her, “Hello”. “Gosh! What a voice!” her inner voice exclaimed. Haven’t we all felt such vibes when we come across The One in our lives? That’s exactly what she felt; she was hooked in an instant. Notion Press, India’s leading self-publishing platform, presents You We, an exciting and passionate accidental romance, by Vanya Rajwar.

Everyone is well-aware of the term Womanizer in today’s world. Well, how about Manizer? Is that even a term? Be that as it may, this term was something that could define Vanessa, the protagonist of You We through whom Vanya Rajwar chooses to narrate the story. However, she refuses to be condensed to such a mere word. Vanessa was just that and a lot more. She was a walking paradox of a woman; a rebel at heart yet a hopeless romantic from the small town of Dehradun. She was immensely in love with her beautiful hometown; nevertheless, she constantly questions the societal norms which are more prominent in small towns, that try to restrain her. Although her roots lie in the conservative Uttarakhand hills, this Pahaadan is defined by being a smart, rebellious and able-minded woman with a supposedly bad reputation. Vanessa loves to indulge herself into a good literary journey and is relentlessly searching for eternal love. Until a Jaat from Haryana stops her dead in her tracks.

Umar is a witty and sarcastic man who gets on Vanessa’s nerves time and again. He is very sensual, and at the same time, he manages to touch the Delphic cravings in texts that she yearns for. Ultimately, she loses herself within him and he makes her feel like a forlorn romantic with an insatiable hunger for his love. At times, Umar presents himself as an alpha male who makes an equally powerful woman like Vanessa take a step back. However, with all these differences, they share the tendency to express themselves in poetry than through words. You We by Vanya Rajwar follows the narrative of Vanessa as she meets her soul mate, or twin flame if you will, with whom she goes on a roller coaster ride and falls hard in love. Will they last forever; two bodies and one soul? Sounds pretty much haywire, right? Then, that’s exactly what this coincidental romance unwinds. Part fairytale, part erotic, and sometimes hilarious, and at times downright uncomfortable, this is one epic love story you shouldn’t miss!

You We author Vanya Rajwar, a pen name, VRa, which translates to denote Brave, is a freelance content curator and blogger from the peaceful town of Doon. As an avid reader, she was born and raised in Dehradun where she fell in love with its town and surrounding places at a very tender age. All thanks to Ruskin Bond and his books, she refuses to leave the town since then, wherever she may go around the world Doon calls her back. Having explored various avenues which included Modelling and Event Management, she realized that writing was her true calling over three years back. With that in mind, she started her own blog called The Soul’s Urge on WordPress. Rajwar is an ambivert by nature and calls herself an eternal yet tormented romantic with love as her only inspiration and muse.
You We by Vanya Rajwar is perfect for a little soulful yearning with some roller-coaster, pulse-pounding romance. Grab your copy of You We in print and e-book format at the Notion Press Bookstore amongst other leading e-commerce portals such as Amazon and Flipkart.