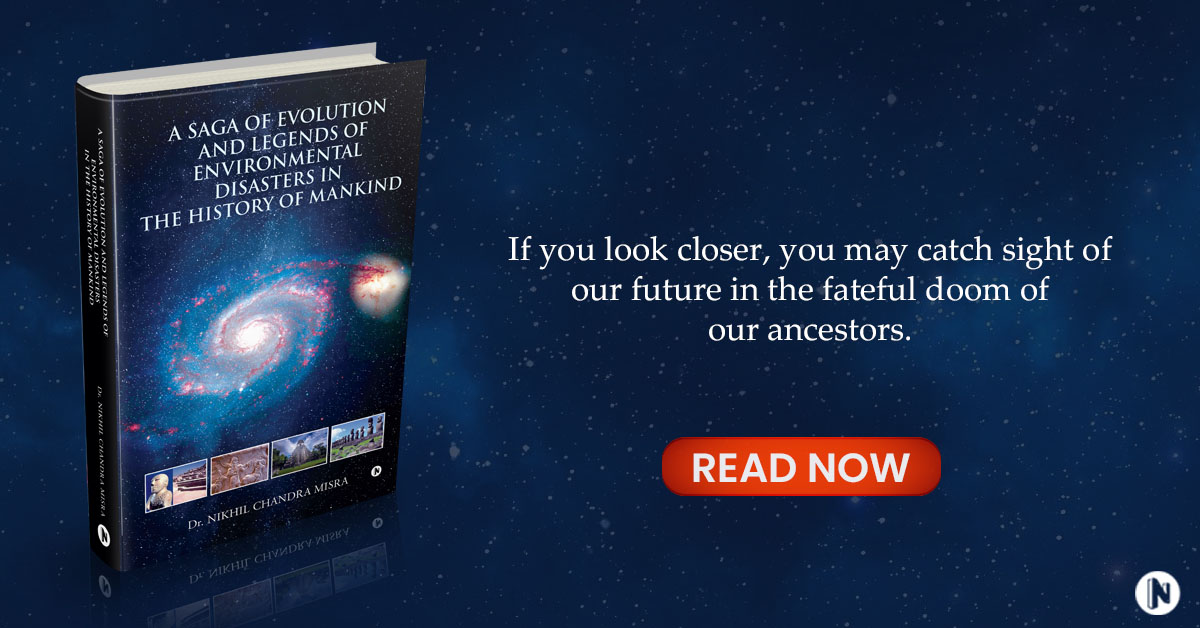 “If we all get together, we can truly make a difference, but we much act now. The window of time is closing.” – Dr. Jane Goodall

Whether it was the deep ocean or the soaring skies where they took birth, whether it was the damp, dark earth or the rugged, sun-beaten rock where they took roots, every child of Mother  Nature possesses a deeply ingrained, almost symbiotic relationship with the rest of its siblings – a relationship thriving on the perfect harmony that prevails throughout the universe known to us.

“The more you know about your past, the better prepared you are for the future.” – Theodore  Roosevelt

Notion Press, India’s leading self-publishing platform, presents A Saga of Evolution and  Legends of Environmental Disasters in the History of Mankind by Dr Nikhil Chandra Misra, a  handbook discussing the birth of the Universe, Solar System, Earth, Evolution of Life, Humans,  and delves into studying ancient civilizations and their extermination due to environmental degradation, leading to disastrous climate changes.

We are an integrated part of the cosmos. Astronomy is a natural science that studies celestial objects and phenomena by using mathematics, physics, and chemistry to explain their origin.  Objects of interest include the universe, solar system, planets, galaxies, meteoroids, asteroids,  and several other astronomical bodies, often thought to be of the status of celestial origin.

Out of the occurrence of a coincidental manifestation, one after the other, it resulted in the creation of life, species and humans.

Acclaimed scientists have contributed to the evolution in a convincing narrative, often supported by indisputable pieces of evidence and intelligent hypothesis. A tiny dot became the universe, followed by the sun, moon, the earth, other planets that revolve around us, nebula,  galaxies and milky ways, and then, the living kingdom. And right there, life evolved, flora and fauna developed.

However, five catastrophic extinctions eliminated these well-evolved species. And this journey is merely laid on the twelve hours of a clock.

In due course, as Homo Sapiens advanced, intricacies like Environment Degradation, Global  Warming and Climate Change came along. Narrative weavers tracked the life and the achievements of ancient civilizations; who laid the cornerstone for anthropological societies, and their brutal fate due to the damage done to the delicate balance of environmental sustainability.

Misra’s A Saga of Evolution and Legends of Environmental Disasters in the History of Mankind refers to and studies these ancient civilizations in-depth, like the Indus Valley Civilization – the master traders, the Sumerians – the pioneers in many fields, the mysterious Maya, and the incredibly industrious Rapa Nui.

Each of these ancient civilizations was exterminated. Why, and how?

As scientists continue to discover more signs of collapsed civilizations, they are stumbling upon plenty of evidence that supports the theory that climate shifts are to be blamed, to a  considerable extent. This enlightening book attempts to answer this very enigma.

A Saga of Evolution and Legends of Environmental Disasters in the History of Mankind might engender a child-like fascination as you delve deeper and farther into it.

Dr Nikhil Chandra Misra holds an M.Tech. in App. Geology from the University of Saugar, Sagar,  MP; PGDBM from Ravi Shankar University, Raipur; First Class Mines Manager’s Certificate of  Competency (R-O) from DGMS, GOI; L.L.B. and PhD from APS University, Rewa, MP. He is a  member of several professional institutes and is considered to be a keen environmentalist.

Dr Misra has authored some acclaimed research papers and his interests also include feasibility analysis for mineral industry, mineral and mine economics, mine scheduling and mine optimization, environmental studies and management, and mineral exploration. He also finds delight in ancient mythological studies, ancient cultures, the classics of Hinduism, cosmos and related literature.

Dr Misra has worked for the MP State Govt. as an officer, and was assigned to the United  Nations Development Project – UNDP Mineral Exploration in MP for three years; working for various assignments, and later with JK Cement Limited in several capacities including the Vice  President. He has remained actively involved with other JK Group companies and has worked on several projects across the country.

He is amongst the top executives and an acclaimed professional in the State of MP and CG.  Under his leadership, JK bagged the prestigious “Quality Excellence award for Best Exploration  Project” in the country, instituted by the World Quality Congress for a project in Panna District,  MP in 2014. Dr Misra is also the recipient of a “Life Time Achievement Award” in 2017 for his contribution in the field of Mining Geology and Environment.

He has been in the profession for about 39 years and has now undertaken writing.

A Saga of Evolution and Legends of Environmental Disasters in the History of Mankind by Dr Nikhil Chandra Misra conveys a strong message, divulging a warning signal against the subjugated approach towards handling issues related to environmental degradation, global warming, climate change, overexploitation of natural resources. It points out the horrifying results caused by the destabilization of balance between sustainable development and nature through historical examples which include the doom of well-groomed ancient civilizations.

Grab your copy of A Saga of Evolution and Legends of Environmental Disasters in the History of Mankind in print and e-book format at the Notion Press Bookstore, and amongst leading e-commerce portals such as Amazon and Flipkart.