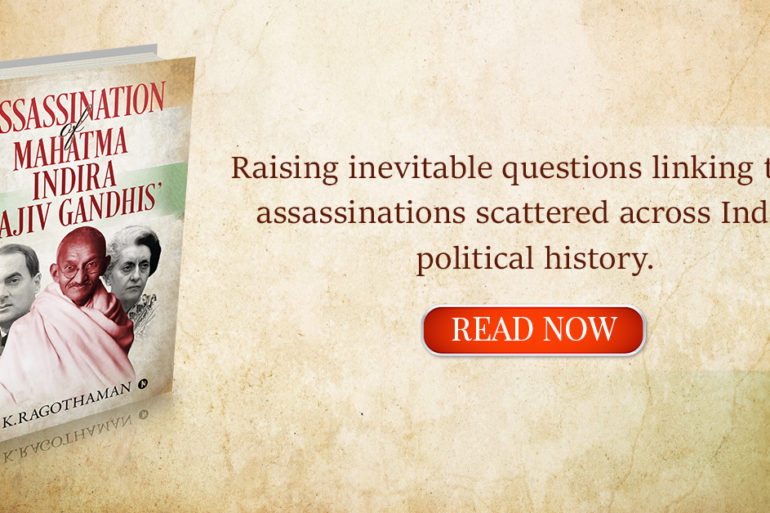 Indian history has witnessed quite a few ruthless assassinations of popular leaders which subsequently unfurled tremendous chaos across the country. Notion Press, India’s largest self-publishing platform, is proud to present Assassination of Mahatma – Indira – Rajiv Gandhis ‘by K Ragothaman, a first-hand account of the most significant killings that left a mark in the political past of India. Assassinations of Mahatma – Indira – Rajiv Gandhis’ offers a closer look at the incidents that sent shockwaves across the country. Starting with the Father of the Nation, Mohandas Karamchand Gandhi, or fondly called upon as Bapu, the book discusses the assassination of the mother-son duo as political leaders, Indira Gandhi and Rajiv Gandhi. The book dives into explaining the ruthless murder of Mahatma Gandhi by a right-wing advocate of Hindu nationalism at point-blank range in the Birla House. As we move on, the author sheds light on the events that transpired into the cold-blooded manslaughter of the only female Prime Minister of India and the daughter of the first Prime Minister Jawaharlal Nehru, Indira Gandhi by her hand-picked trusted bodyguards themselves. Lastly, the book delves into the tragic event orchestrated by the LTTE to claim the life of the youngest Indian Prime Minister of India, Rajiv Gandhi. The unfortunate incident involved the death of 14 innocent lives excluding the intended target at an election campaign in South India.

These incidents were heart-wrenching to witness and lead to other catastrophic events such as revenge killings and bloodied riots that spiralled across the Nation, and simultaneously affected the economy of the country considerably. These accounts, regardless of their motive, make us wonder about the extent to which we failed to protect the ones who fought for our freedom, to protect the ones who struggled for our protection. However, there is a bigger picture behind these incidents. A comparative study on these three specific instances in history over various periods denotes a certain pattern that the book discusses. Never before has a book dared to pinpoint episodes and offer clarity on subjects, such as these, that are often shrouded in the conjecture that is aimed to redirect the gullible crowd. This is what sets Assassinations of Mahatma – Indira – Rajiv Gandhis’ by K Ragothaman, unlike any other book or case study that has been conducted on these events in the past.

As the Chief Investigating Officer of the Rajiv Gandhi Assassination Case, Assassinations of Mahatma – Indira – Rajiv Gandhis’ author K Ragothaman is in a pivotal position to discuss the intricacies of the three most history-altering incidents of the 20th century India. As a post-graduate in Economics from Annamalai University, he held the post of Sub-Inspector of Police in the CBI and underwent a year’s training in the National Police Academy. Ragothaman has served in several places across India and has handled vital and significant cases of the CBI in Anti-Corruption, Economics Offences, Banking and Security Fraud cell, and Special Crimes, involving the former Prime Minister of India, Chief Ministers, senior bureaucrats in the Government of India including public sectors, and industrialists as well.

With his service to the Nation lasting over 36 long years, he was elected as the Chief Investigating Officer of the Rajiv Gandhi Assassination Case and was associated with the same for more than 10 years. Ragothaman was awarded a Police Medal in 1988 and the President Medal in 1994 for his meritorious and distinguished work. As a former editor of Annamalai News, a weekly magazine, he has published his debut literary work, Conspiracy to Kill Rajiv Gandhi, in both English and Tamil languages, and later authored Third Degree Crime Investigation Management. Post his retirement; he has also produced a documentary titled Human Bomb that is currently available on YouTube.

The assassinations of influential political leaders have always been prompted by some religious, political, ideological or military reasons. However, we lose a valuable individual, a public figure that we admire, respect and love. Assassinations of Mahatma – Indira – Rajiv Gandhis’ by K Ragothaman is an attempt to explain these events with reconstructed dates to bring the reader to a clearer and holistic picture, to see the events in a new light, to see how these seemingly individual tragedies are interconnected. Grab your copy of Assassinations of Mahatma – Indira – Rajiv Gandhis’ in print and e-book format at the Notion Press Bookstore amongst other leading e-commerce portals such as Amazon and Flipkart.