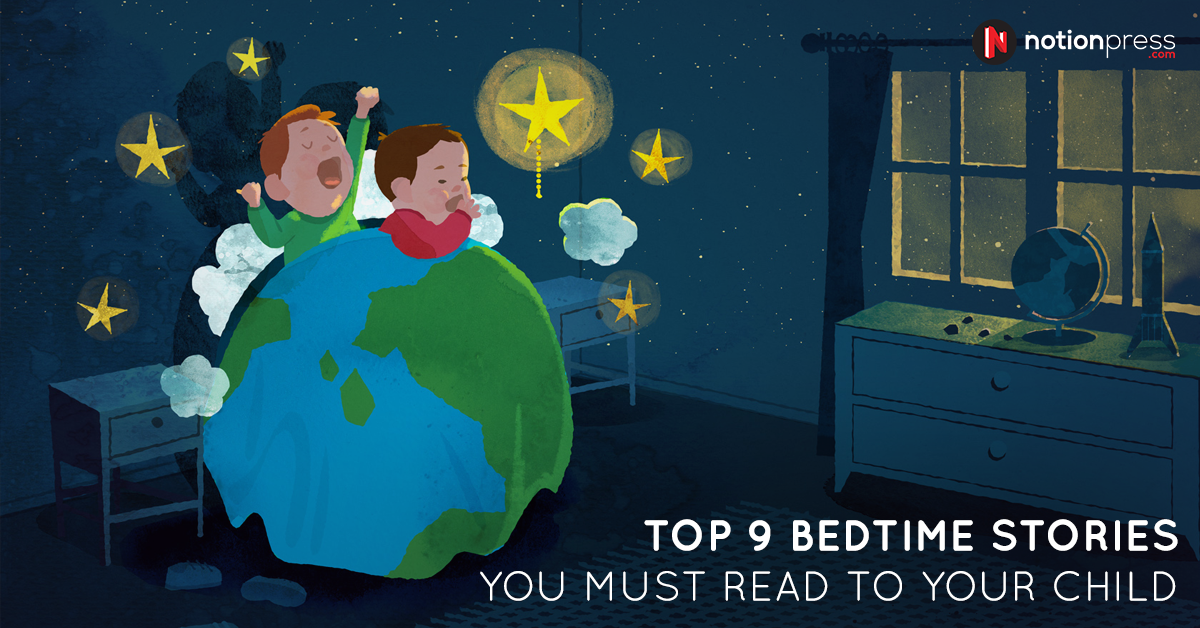 Top 9 Bedtime Stories You Must Read to Your Child

As a child, didn’t you love it when your parents tucked you into bed, read you a book and kissed you goodnight? Reading a nice book to your child ensures they get a sound sleep and sweet dreams; it is also a great way to introduce them to pictures, words and if you can put up a show while telling the story, a great dose of entertainment. Here’s our list of the top nine bedtime stories which every kid will enjoy listening to.

Charlie and the Chocolate Factory by Roald Dahl

Published in 1964, Charlie and the Chocolate Factory became a timeless classic and one of Roald Dahl’s most well-received novels. He has since gone on to release a sequel Charlie and the Great Glass Elevator. The story follows 11-year-old Charlie Bucket who receives a golden ticket to visit Willy Wonka’s Chocolate Factory. He along with other kids embarks on a sweet adventure inside the factory, as they encounter many of Wonka’s factory helpers and magical treats. This is a great book to read to your child as it incorporates everything children love – chocolates, funny characters and a moral ending. The book has even successfully spawned two feature films.

One of the most popular fables, Three Little Pigs was originally published as a nursery rhyme in 1842 by James Halliwell-Phillipps. The story follows the altercation between a big bad wolf and three little pigs. The pigs must use their wit to escape the wolf’s capture. The story teaches kids valuable lessons of strength and intelligence while also teaching them the basic count of the number 3. It has since gone on to be rewritten into short story collections, a Disney cartoon and a musical.

Snow White and the Seven Dwarfs by Wanda Gag

Originally a 19th Century German fairy tale by the Brothers Grimm, Snow White and The Seven Dwarfs got its best-known illustration by Wanda Gag in 1938. The story revolves around the fair young princess known as Snow White who, after venturing into the woods, finds a small cottage of seven dwarfs. The dwarfs shelter her from the clutches of her evil stepmother. Cute, adventurous, romantic and filled with plot twists, this story will give your child some amazing dreams. Popular animated and live action movies based on this story have also been released by Disney.

Splat the Cat by Rob Scotton

Published in 2008 by Rob Scotton, Splat the Cat has a lot of interesting anecdotes around animal friendships. The story follows Splat, who is frightened as it is his first day at Cat School and hence he brings along his pet, a mouse, to feel comfortable. Things go out of hand when Splat’s pet escapes its cage, creating a frenzy among other cats in the school. What follows is a long and funny search for the mouse around the entire school campus. It is a really amusing story that is worth a read multiple times. Your child will be left in fits of laughter as you read about the misadventures and odd characters.

Brown Bear, Brown Bear, What Do You See? By Bill Martin Jr. and Eric Carle

Published in 1967 by Bill Martin Jr. and Eric Carle, this book consists of a set of illustrations that feature a brown bear as the main character along with a host of supporting characters. A big brown bear looks on at various other characters with the narrator asking the question, “Brown Bear, Brown Bear, What Do You See?” The bear will reply based on the characters’ looks and features. Aimed to educate preschoolers about shapes, sizes and colours, the book is best read during bedtime as children will be able to register what they learnt.

Regarded as the most powerful and oldest collection of moral stories ever written, Panchatantra is a classic that can be read anywhere, let alone bedtime. The stories were written and compiled by Pandit Vishnu Sharma in the 3rd Century BC. Each story elaborates on a different moral and teaches kids about the moral in a well-illustrated manner using the aforementioned animals. Educative and entertaining in every turn of a page, Panchatantra is the kind of book that must be read and re-read during bedtime.

Published in 1943, Malgudi Days is one of the few short story collections that can be read and enjoyed by anyone young or old. The book consists of 32 short stories that chronicle the lives of the people of Malgudi, a small town in South India. The short stories are not interconnected and can be read in any given order. Each story also uses a different theme, keeping the reading experience fresh and interesting. This is one of the few books on the list that can be picked up again and read by your child when he/she grows older and begins to understand words and sentences.

The Secret Garden by Frances Hodgson

The Secret Garden was originally published in 1911 as a magazine series and has since gone on to become a must-read in schools. The book tells the story of 10-year-old Mary Lennox, who is rude and angry towards her adoptive family. A good-natured maid tells her the story of a secret garden near the house. Mary then gets curious and begins to search for this garden, discovering new things that make her a better person. The story is an entertaining bedtime read because of its mysterious plot and teaching of good habits.

The story of Little Red Riding Hood can be traced all the way back to the 10th Century, but the most popular versions were published by Grimm brothers Jacob and Wilhelm, in the late 19th Century. The story follows the journey of a little girl who wears a red cloak, giving her the name Little Red Riding Hood. She journeys through the woods hoping to deliver some treats to her grandmother. Along the way, she is followed by a hungry wolf. This story has a mix of adventure, humour and thrill, which makes a great show-and-tell entertainer for your child.

Bedtime stories are a great way to comfort your little one to sleep. Who knows? It might just inspire them to become authors in the future. Want to write great children’s books like these? All you need is a great idea, a computer and a trustworthy self-publishing partner. Visit Notion Press for all your self-publishing needs and bring out the aspiring author in you.