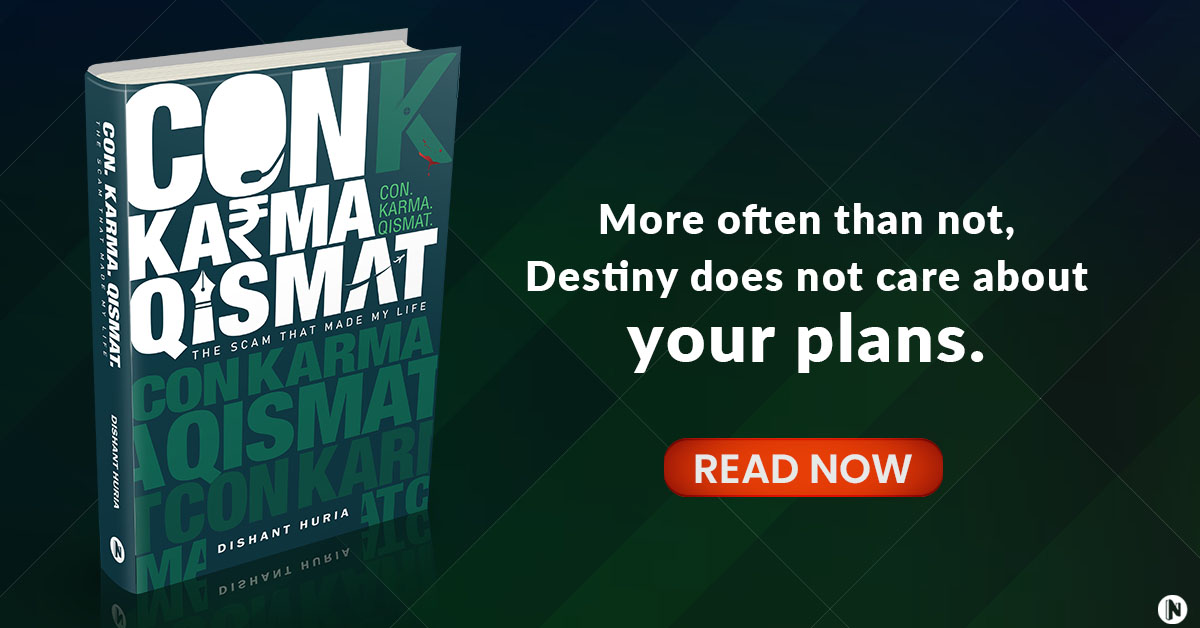 “A con-artist runs with his lie to fool everybody until Karma catches up with him for the inevitable payback.” Greed and the desire for power often lay a solid path to unconscionable acts of fraud and deceit. Notion Press, India’s leading self-publishing platform, presents Con Karma Qismat, chronicling the riveting tale of a Media Graduate, by Dishant Huria.

When power and money are at stake, people often trade in their consciences for more instantly gratifying rewards and face the consequences when their elaborate schemes spiral out of control! The narrative unfolding the life of 21-year-old Aarush Mehta begins with him hustling to earn a living and struggling to land a respectable job in the Media Sector. Unwavering as he is, Aarush decides to try his hand at Technical Support Sales to make his ends meet. His only intention is to, when the right opportunity knocks at his door, go back and pursue his white-collar career. Little did he know that destiny had other plans for him. Being intellectually smarter than most, he begins to get curious about the working of the BPO and their financial setup. As time passed, Aarush excels at being a Technical Support Salesman and his growth accelerates.

Eventually, he begins to source income by keeping his ethical instincts at bay by switching one job to another and finally, ends up starting his own technical support company. As time passed, Aarush establishes himself as an affluent individual who happens to catch undesired attention. However, with all his glory and overconfidence blinding himself, he chooses to ignore it. Until one fine day, 20 armed policemen walk into his office space and overtake the entire premise. Consequently, his actions have landed him up in jail. As the plot grows in Con Karma Qismat, Dishant Huria vividly portrays how Aarush gets away to unveil the greatest Indian technical support scam, a 10 Billion Dollar industry, thriving by ruthlessly scamming millions of Americans around the globe.

However, Con Karma Qismat does not stop there. The book transports a reader to the present world where Aarush bumps into an old acquaintance, a fellow employee/ scammer from his old technical support sales days, reminding him of his regretful past. Aarush struggles with the anxiety that haunts him every day as he ponders about what he’s been doing in the early years of his career. He finds himself at his ex-girlfriend’s house, Suchita’s, the only place he had hoped to find some solace. Instead, all he encounters is another awkward scenario as she lashes out at him for being a snob. In that very moment, amid that tussle, Aarush stumbles upon an idea for his next novel centred on Technical Support.

As the plot progresses, he runs into a high-profile Brazilian designer who incites unknown emotions in his life where he is still stuck in a rut with Suchita in the past. Con Karma Qismat unfolds the story of Aarush as he strives to complete and publish his work that would ultimately expose the Technical Support Industry, and depicts the sizzling equation with his newfound love as he battles the regrets of mistreating Suchita.

Con Karma Qismat author Dishant Huria is a reluctant journalist and a new age writer who was born and raised in the Capital City of India. Huria began his creative career while trying various positions in the field of Journalism and Advertising while simultaneously working towards Fiction Writing as his definitive focus. Currently, he is the author of two successful fiction books that comprise of the highly-acclaimed and a regular Amazon Top 100 titled When Karma Goes Upside Down. His second venture into writing is called The Escape Route and has already hit the shelves this year! When he isn’t scribbling up a storm, you may find him reading the works of Charles Bukowski, watching obscene amounts of boxing videos without a trace of shame, and optimistically checking social media fan messages.
Con Karma Qismat by Dishant Huria perfectly paints the picture of instances of corporate deceit and fraud with a perfect addition of redemption. Grab your copy of Con Karma Qismat in print and e-book format at the Notion Press Bookstore amongst other leading e-commerce portals such as Amazon and Flipkart.