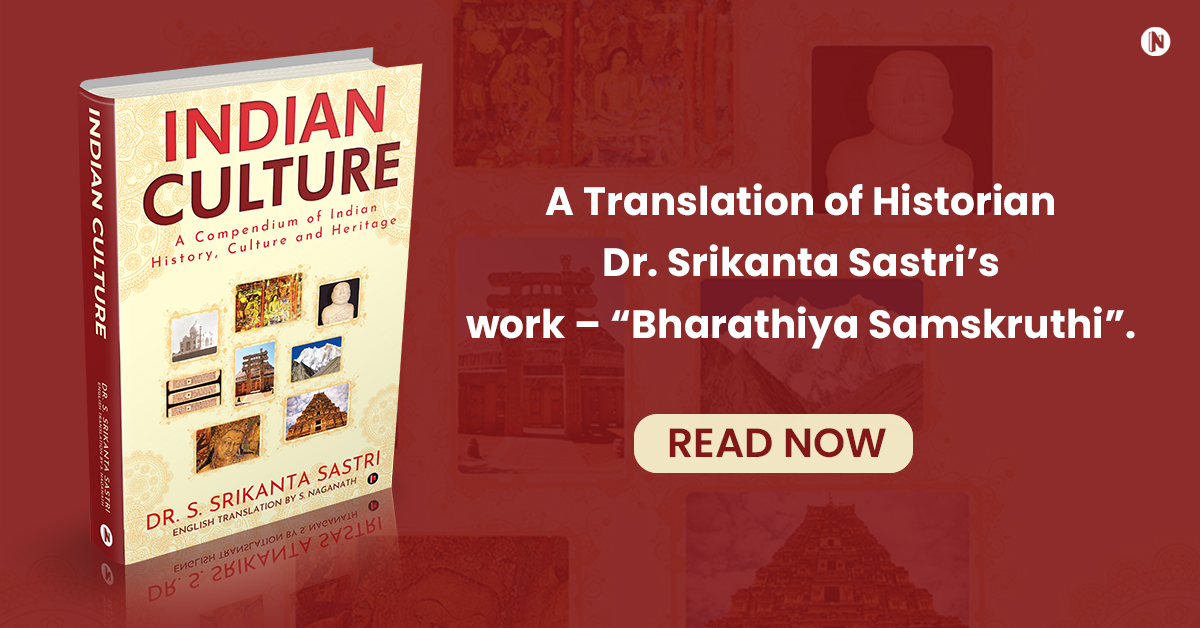 India comprises confetti of emotions through diverse landscapes, traditions, customs and cultures. With every inch that you dig deeper in her heart, a kaleidoscope of colours flow through her veins, spreading love and happiness everywhere. This cultural diversity intrigues everyone across the world. With a rich heritage, myriad attractions, several religions, practices and customs, India never stops to amaze global citizens. Notion Press, India’s leading self-publishing platform presents Indian Culture by S Naganath, a translation of Dr S. Srikanta Sastri’s Bharathiya Samskruthi originally written in Kannada.

Indian Culture discusses in depth the several factors that make India truly incredible. Beginning from the physical features of the Indian sub-continent, the book discusses several key areas such as geography, geology, anthropology and the origins of the early man in India. The book further throws light on India’s language and linguistic differences since early times, the Indus Valley Civilization, Vedic Culture, Religion, society and much more.

Further to this, the book draws focus on India’s greatest achievements in the field of Mathematics, Astronomy, Chemistry, Metallurgy, Architecture and Medicine that have been momentous in India’s identity and holistic growth.
The Indian culture is often labelled as an amalgamation of several segments of cultures, including traditions that are several millennia old. Due to its rich and precious cultural and natural heritages, India came to be known as the land of great wonders and diversities.

Dr S. Srikanta Sastri, renowned historian of University of Mysore (1904 – 1974) taught History and Indology at Maharaja College, Mysore from 1925 – 1960. He happens to be the first research scholar of University of Mysore and he wrote: “Sources of Karnataka History, Vol I” in 1940. He is the second recipient of D. Litt from University of Mysore in 1949. He was proficient in fifteen languages like Sanskrit, Prakrit, Greek, Latin, French, German, Telugu, Kannada and Hindi etc. His first research paper “Conquests of Siladitya in the South” was published in the Royal Asiatic Journal of Great Britain & Ireland in 1925. He has published 116 research articles in English and 122 in Kannada. He has contributed articles in Telugu, Hindi and Sanskrit. He has published five books in English and seven in Kannada. He has also delivered 20 radio talks on All India Radio (Akashvani) from Mysore, Bangalore and Dharwad. Dr S. Srikanta Sastri was nominated as Professor Emeritus of University of Mysore by U.G.C. after retirement from 1960 to 1963. He was presented with a Festschrift Volume called “Srikanthika” by the Post Graduate Department of History of University of Mysore on 15th January 1973. He was also honoured during the Diamond Jubilee function of Mythic Society by the then Governor of Karnataka Sri Mohanlal Sukhadia in 1973. He was felicitated by the Kannada Sahitya Parishat during the annual Sahitya Sammelan in 1973.

His book ‘Bharathiya Samskruthi’ was selected by Karnataka State Government as a milestone work during its Golden Jubilee year and it was listed with 99 other important works. In 2008, the Karnataka Government published a popular subsided edition (3000 copies). This book has seen 6 editions in Kannada. We feel that this book first published in Kannada in 1954 is still relevant to the intelligentsia. Dr. S. Srikanta Sastri’s books are found in 146 international libraries according to WorldCat Catalogue.

Indian Culture is now available in e-book and paperback formats on all major e-commerce platforms including Amazon, Flipkart and the Notion Press online store. Grab your copy now!