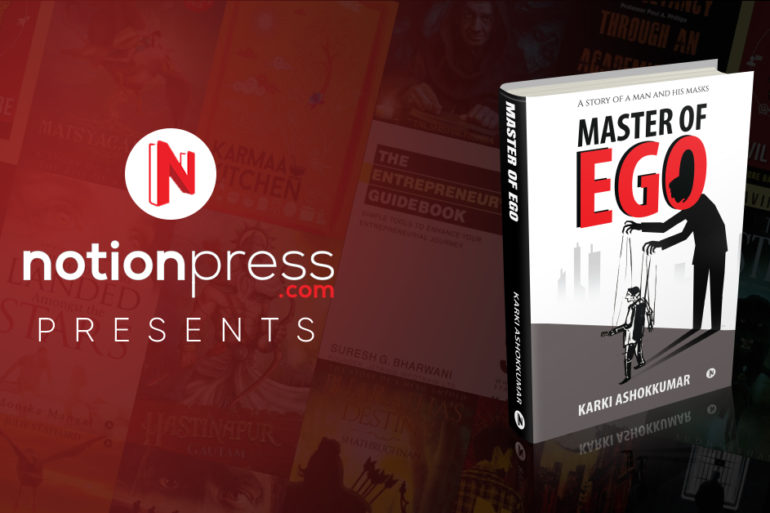 Notion Press, India’s largest self-publishing platform, is coming out with a book that lays down a story of a man and his companion. The book, Master of Ego, by Karkin Ashokkumar is a gripping read that unravels into a tale of an ambitious man and his unsatiated ego.

Ego is a term that can turn the tide of a conversation and even ruin relationships. In most cases, ego has turned out to be evil. But ironically, the ego is a common trait that we as human beings have. The only fact that remains different is the level of influence that this emotion has on the individual.

The nail-biting story is about a youth from the country-side who dreams of making it big in his life. His abilities and his companion, ego, bring him to the city, where he has come to pursue his dreams. The first transition in the protagonist is that he changes from a village boy to a city lad. And in no time, he emerges out as a ‘cool dude’, heavily influenced by Western culture.

As he swiftly transforms from a rural village to a city, and then soon adapts to Western culture, he finds a woman named Aneesha. She might, perhaps, be the love of his life, but is his companion going to turn things around for him? Well! You have to find out for yourself.

Go grab a copy of this fantastic novel by Karki Ashokkumar in the print or online version from notionpress.com or one of the leading e-commerce websites Amazon or Flipkart.

Speaking about the book, the author, Karki, says, “We have often come across stories that discuss about people’s different traits. But, little do we read about man and his ego. This story captures this aspect of man’s life and puts into a tale that helps uncover various aspects of life.” He goes on, “This book is everything – an entertainer, a book with a message, and something that every person can easily relate to.”

Karki Ashokkumar is an ardent social worker and a mentor, passionate about his adventurous life, arts and music. His work is often based on life’s themes like psychology, Indian cultures, contemporary American culture, myth, human mindsets, love and learnings from the challenges of living in a multicultural world. He has won awards in sports such as volleyball, chess and table tennis during his college and school days.

With a career spanning over 14 years, Karki is a multi-skilled professional, both in IT and International Business Consulting. This successful professional began his career as a part-time freelance trader, marketing and merchandising expert in Chennai. As a hobby, he has also written many stories with screenplay and has directed an Indian musical short film, Yaaro Nee, in 2014.

Karki’s many international assignments brought him in contact with different personalities and behavioural patterns from various cultures, and his keen observation skills allowed him to understand the varied motivations that defined their character. This led him to pen the story, Master of Ego, a psychological journey where the protagonist turns inward and examines his life inside out. Karki Ashokkumar lives with his wife and kids in Chennai, and this novel marks his entry into creative writing.