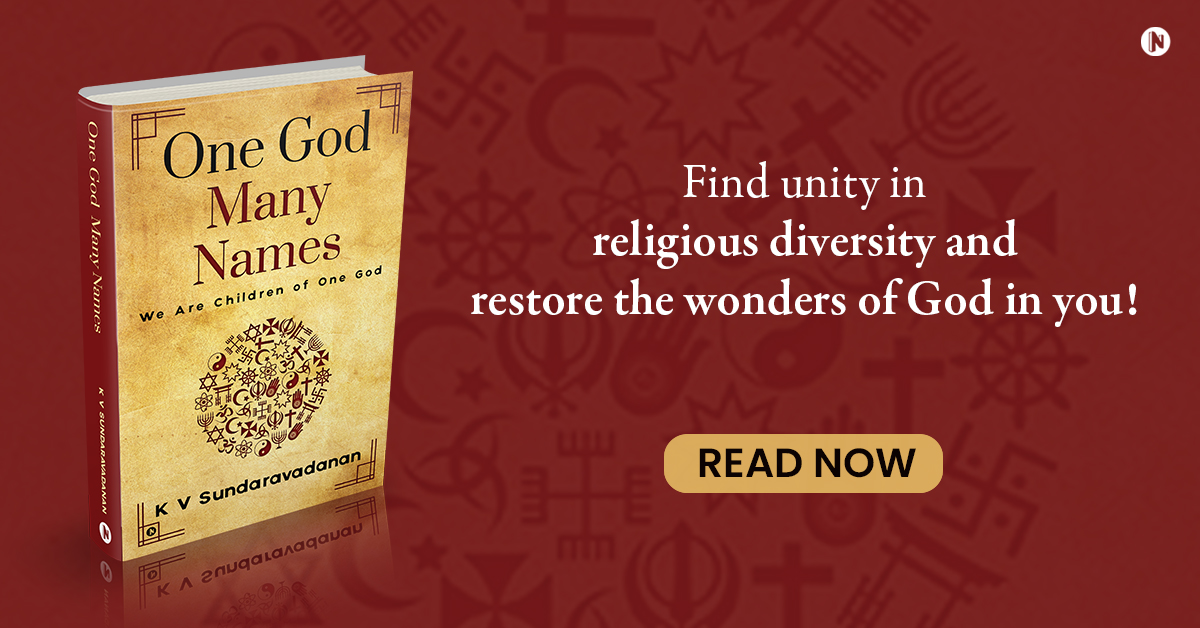 “God has no religion.” – Mahatma Gandhi.

The world has seen several messengers and prophets who chose to come to life along with us across various geographical locations and points in time in history. They gifted the world with different texts called scriptures in varying formats with messages unlike each other. What is more, they spoke in diverse languages and visually appeared to be unique.

Nevertheless, their purpose was the only aspect that remained unwaveringly constant – to unify people on the grounds of a higher truth, but never to discriminate.

Notion Press, India’s leading self-publishing platform, presents One God Many Names by KV  Sundaravadanan, an insightful handbook highlighting the uniqueness of Hinduism, Christianity,  and Islam as one of the many paths all leading to the One Truth.

Riots and armed conflicts; all in the name of religion. Are religions different from one another?

The world stands violently divided based on faith. Concerned with recurring violent conflicts and riots emerging across the globe in the name of God, especially among Muslims, Christians and the Hindus, Sundaravadanan composes One God Many Names as a compilation of the essence and similarities in the core values of these religions as expressed in their acknowledged scripture.

This insightful handbook identifies 22 such similarities in the same number of chapters to open the eyes of their followers.

With an aura of authenticity, One God Many Names comprises of verses as contained in the respective scriptures; namely, the Bhagavad Gita, the Upanishads and the Vedas, the Bible, the  Quran and other related sources. It also has extracts from sermons and speeches by theologians and scholars.

To offer readers a holistic view of these religions and realize the meaninglessness and futility of conflicts and riots, the book provides additional information with a focus on Peace and  Religious Harmony.

One God Many Names begins with the birth of the messengers of God, Sri Krishna, Jesus Christ and Prophet Muhammad, and their similarities in their origin. Discussing the prophecies

witnessed during their birth and their persecution as chronicled in the scriptures, legends and biographies, the narrative follows their role as Messengers of God/ Saviors and the scriptures given by them.

At the core of One God Many Names, the author discusses how God is perceived by the adherents; monotheism versus polytheism. Sundaravadanan debunks the misconceptions which are at the root of all such conflicts. The scriptures proclaim that there is only one God who is formless, genderless, infinite, all-pervasive, omnipresent and eternal in one voice.

It proves that God is one but called by many names.

There are surprising similarities in the creation of the universe, its dissolution and the concept of Heaven and Hell. It draws striking parallels among the scriptures of the beautiful idea of  “Surrender to God” and places a lot of importance on this aspect.

On the other hand, through One God Many Names, Sundaravadanan emphasizes on the aspects of Love, Peace, Harmony, Forgiveness, Prayer, Fasting, and Charity while demarking the need and necessity for war. Chapters on Miracles and Storytelling are bound to pique the interest of readers through the literary journey.

One God Many Names by KV Sundaravadanan highlights the uniqueness of these religions as one of many paths all leading to the One Truth.

KV Sundaravadanan is a Post Graduate in Science and a Diploma holder in Business  Management. He spent his career in marketing and distribution of chemical fertilizers and closely associated with the State and Central Governments in India. He has travelled widely across the country and abroad.

Hailing from a middle-class Hindu family steeped in religiosity and spirituality, he studied the  Bhagavad Gita, the Upanishads, the Holy Bible and the Holy Quran along with commentaries by established theologians and scholars after his retirement.

Sundaravadanan found the conflicts and riots in the name of religion to be meaningless and futile, leading him to write One God Many Names to drive home the truth that God is One and that we are all the children of One God.

Sundaravadanan lives in Bengaluru with his beloved wife, Savitri, and elder son, Sriram.

Grab your copy of One God Many Names by KV Sundaravadanan in print and e-book format at the Notion Press Bookstore, and amongst leading e-commerce portals such as Amazon and  Flipkart.