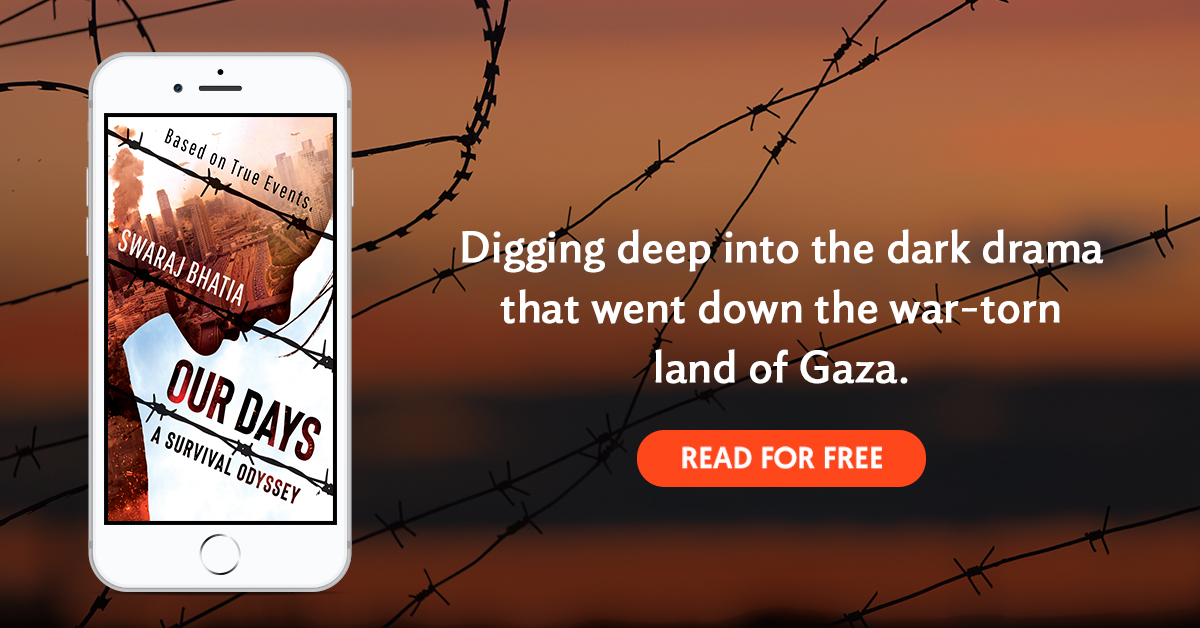 What if you’ve been told you can stop a war?

An ex-CIA agent, her husband; a retired Navy SEAL, and a veteran spy must survive the deadly siege of Gaza unarmed on a covert coalition mission to extract vital Intel and stop the war from taking an apocalyptic turn. Notion Press, India’s leading self-publishing platform presents- Our Days: A Survival Odyssey by Swaraj Bhatia.

Our Days: A Survival Odyssey is a war-drama thriller based on Operation: Protective Edge, which took place in Gaza from July 2014 to August 2014 between Israel and Hamas. Following the June 11 kidnapping and murder of three Israeli youth by Palestinians from the West Bank, Israel launched a campaign of collective punishment in the occupied Palestinian territory. In the West Bank, the Israeli military carried out raids in Palestinian cities and villages, detained at least 800 Palestinians without charge, destroyed homes, closed universities, restricted movement, and killed and injured a number of Palestinians.  Israel also carried out bombing attacks against Gaza that killed several Palestinians including a child. After these attacks, Palestinian factions in Gaza began firing rockets into Israel. Operation Protective Edge developed from this context.

The novel is a window into the lives of Palestinians in Gaza in a living hell amid a never-ending conflict. This book is an empathetic and informative perspective depicting the actual events that occurred in the war and the ground-breaking discoveries that shaped it.
This war-drama thriller in which delves into the lives of unarmed people who are stuck in a war-torn land and the book deals with almost all the aspects of war be it the human cost, economic consequences, diplomatic efforts, and battles.

Author Swaraj Bhatia is a drama-thriller genre novelist From Indore. Formerly, he worked in several industries such as graphics designing, sale, and content and is also a musician. He played the lead actor in a children’s film “Hum hain bharatwasi” at the age of 10. Swaraj is now dedicating his entire time for his vocation of writing.

The writing method of Swaraj is articulate, informative, and illuminating which paints a picture in the readers mind as if they are present inside the story. He is a gripping storyteller whose characters can relate to his readers and invoke empathy.

He extensively researches on his subjects and reflects the psychological aspects of human nature through his existential narrations. Swaraj went through sniper training to learn about the life of soldiers and technical aspects of weaponry.  He is a poet and a short story writer too.

Our Days: A Survival Odyssey is now available on Amazon, Flipkart and on the Notion Press Online Store. Grab your copy now!