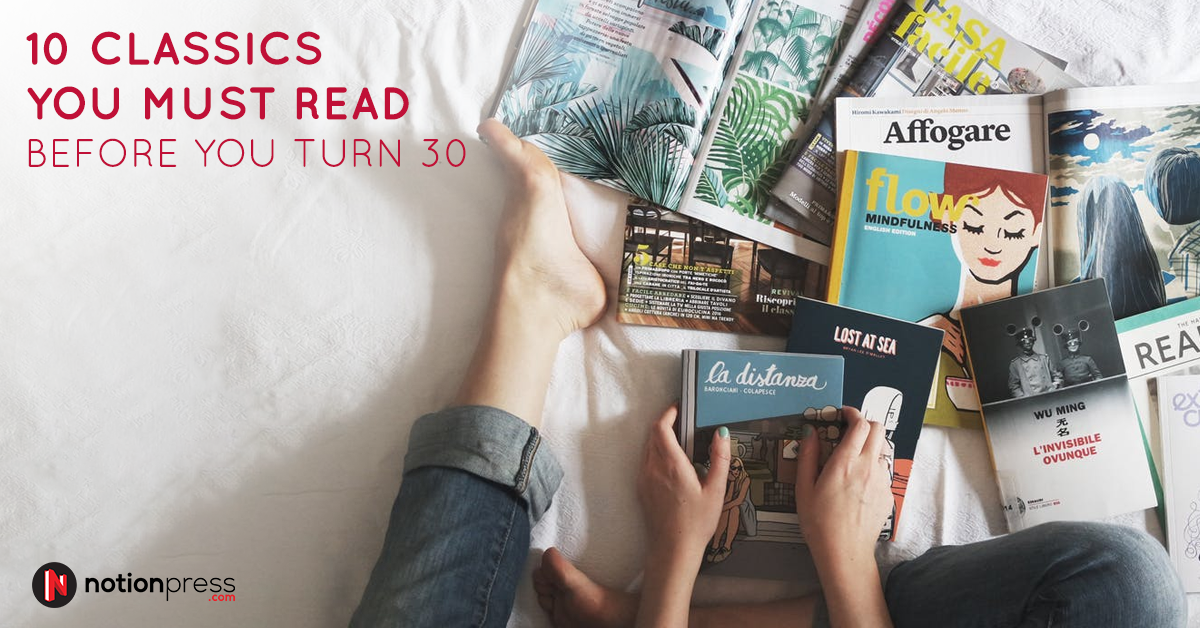 Ten Classics You Must Read Before You Turn 30

Published in 1960, this book won the Pulitzer Prize and is an integral part of modern American literature. It revolves around racial injustice and the destruction of innocence, and also addresses issues of class, courage, compassion and gender roles. This story takes place in the town of Maycomb in Alabama during the Great Depression. It revolves around Scout, who lives with her younger brother and father, Atticus, a middle-aged lawyer. When a black man, Tom Robinson is accused of raping a young woman, Atticus is appointed to defend him. The story is captivating and unfolds in the most interesting manner. Lee’s language and writing style have often been praised by critics worldwide.

‘All happy families are alike; each unhappy family is unhappy in its own way.’

That is how this story begins and this classic about doomed love is admired all over the world. The protagonist, Anna is unhappily married to Alexei, but creates a high-profile scandal by having an affair with Count Vronsky. She is faced with a difficult choice when her husband asks her to go to exile with Vronsky and never see her son again, or stay with the family and abide by his rules. This book takes one on a heart-breaking journey, as their relationship is often compared to the newlyweds Kitty and Levin, who struggle to make ends meet, but share a touching bond.

This story revolves around Ebenezer Scrooge, an old miser who hates Christmas. He loves money more than anything in the world and is not a kind and benevolent person. He is visited by three ghosts, who show him his past, present and future. He witnesses several incidents from his life, which changes the course of his life. He realises how much he has lost and the relationships that have been sabotaged due to his greed. This book is a must-read for it portrays the importance of kindness, generosity and compassion, which essentially are the spirit of Christmas.

This book is often called Charles Dickens’s masterpiece and it shocked readers when it was first published. This is the tale of Oliver Twist, an orphan who starts his life in a workhouse before he escapes to London where he is taken into a lair of thieves led by an undertaker. He becomes a member of a gang of juvenile pickpockets led by Dodger and this elderly criminal. The rest of the story deals with his escape from this den and how he redeems himself. The story deals with elements of the underworld, which was considered quite unusual at the time of writing.

The story begins with Mr. Earnshaw, owner of Wuthering heights bringing home an orphan from Liverpool. He names him Heathcliff and raises him with his children, Hindley and Catherine. Hindley hates Heathcliff and does everything he can to harm him. After Earnshaw dies, the Lintons get possession of the tower. They take Catherine in, but refuse to allow Heathcliff to stay. This hurts him deeply and he plots revenge against Edgar Linton for taking Catherine away. She ends up marrying Edgar and has a complicated relationship because they both are from different worlds. When Heathcliff returns as a wealthy man years later, he seeks vengeance for his misery.

This humorous book from Jane Austen revolves around the protagonist, Elizabeth Bennet as she deals with a prejudiced society in the late 18th century. It talks about the struggles of the Bennet family to get their five daughters married and the courtship involved. Elizabeth is the second eldest daughter and is forced to get married when she turns twenty. She is introduced to the rich Mr. Darcy at a ball through a friend of Mr. Bingley, a prospective groom for her elder sister. Initially, Darcy dislikes Elizabeth and refuses to dance with her. During their second meet, they grow attracted to and start liking each other. Darcy is highly conscious of his status and struggles to accept people below his level, so he repeatedly clashes with Elizabeth on many issues. This book covers the journey of how they make it work in the end.

This book takes us on a fun journey, as it speaks about adventures of a young girl named Alice. She is sitting on a river bank with her sister after a long tiring day. She sees a rabbit with a coat and clock, and follows it into a hole. She goes down the hole and finds herself in a wonderland filled with mystical creatures. She experiences some exciting incidents, but finally is witness to a crime and has to go to court and stand before a jury. Her trial and the adventures in this wonderland make this a truly enjoyable book.

This book has several important characters and revolves around patriotism, honour, friendship and betrayal. It is the story of Brutus, Julius Caesar’s friend who is convinced by various conspirators and agrees to assassinate him, as he fears Caesar’s ambition. He reflects on the dangers of having Caesar crowned, and believes that he is doing a noble act and protecting his country by killing him. After that, Caesar’s body is displayed to the public and Brutus gives a speech to justify their action and receives their support. Mark Antony, another friend of Caesar’s meets the conspirators and asks to speak at the funeral. They agree and Antony’s speech rouses them against the conspirators, which makes them flee. In a surprising turn of events, Shakespeare moves the reader to tears and makes them introspect on the real meaning of loyalty and patriotism. A must-read!

One ring to rule them all!

This story begins when an unsuspecting hobbit, Frodo Baggins is given the task of destroying a ring that corrupts and enslaves the person who wears it. The ring originally belonged to Sauron, a dark lord who is on the rise again. The only thing stopping him from reaching his maximum power is the ring. Sauron continues to search for the ring, but the hobbit along with people from the Middle Earth form an unlikely alliance. They form a fellowship with the objective to destroy the ring. They encounter Gollum, a hobbit bewitched by the ring. The only way to destroy the ring is to go to Mordor and melt it in the fire that forged it. Whether they are successful or not, and the obstacles they encounter in this journey is written in a captivating manner.

Hagrid, the keeper of the gates at Hogwarts School of Magic says this when he meets Harry Potter and hands him his letter to Hogwarts. Harry Potter is the story of magic, family, friendship, righteousness, revenge and love. Lord Voldemort is a wizard, who is obsessed with power and dark magic. He murders everyone who poses a threat to him, including Potter’s parents. This book follows Potter and his friends on their journey to defeat Voldemort. Emotional and touching, this book shows us what the human mind is capable of. It might not be a classic in the true sense of the word, but is definitely on its way to becoming one!