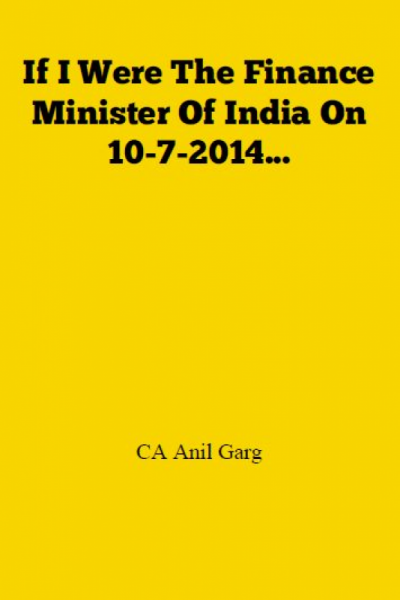 The new government rode to power with nearly unprecedented public support with huge expectations. People had been simply convinced that Narendra Modi did have concrete plans in his mind to kick start Indian economy for rapid growth. Naturally, all eyes were set on the first budget presented on 10-7-2014.

Unfortunately, it proved to be anti-climax. It did not contain any major policy decisions. There was certainly no game changer. It was an ordinary budget exercise that the previous government had been going through for a full decade. True, it is only the beginning and future can still be bright, but the point is that the new government does not appear to have assumed office with some homework about Indian economy. It does not seem to have any ideas on what to do to make it as prosperous as any other average economy of the world.

The author proposes through this work, major policies that the new government could have considered through this budget, and led Indian economy to a robust start for a sure success.

CA Anil Garg, 56 yrs, is a Chartered Accountant, with 33 yrs experience of trade and industry, including last 16 years as entrepreneur. He has been brilliant in his academic accomplishments (was 7th in university, 11th in CA, and 1st in post graduation in Management Accounting). He served in various industries viz., engineering, textile, cement, and edible oils as audit, finance and management executive, in India & abroad, before setting up a factory in 1997 for manufacturing PET bottles himself. Employing the world-class technology, his business was successful being the second largest for agro chemicals containers, and was highly reputed across India for edible oils, pharmaceuticals, chemicals and liquor applications as well. Ever changing government policies, and general government hostility to business evaporated his zeal which explains why manufacturing is shrinking in India. In 2011, he pulled out of active business.

As entrepreneur, he got exposed to most facets of the country’s governance and was able to compare the same with rest of the world. He realized that while Indians are next to none in caliber individually, they are a complete disaster collectively as a nation. India is a bottom performer in almost anything, even in farm yields, and is among the most unsafe countries in the world! And, this is when Indians are God fearing, non-expansionists and content. Except for brief spells of zeal under Rajiv Gandhi and Narasimha Rao, India has been condemned with poor leadership and misplaced ideology of socialism.

He has been writing articles on these subjects and sharing them with professionals like CAs, MBAs and Lawyers on their websites. These have been widely appreciated.