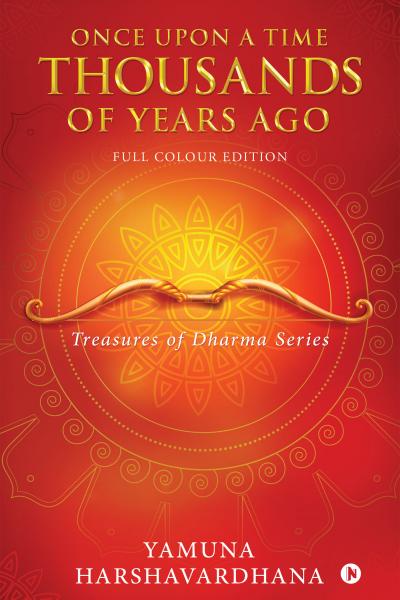 Once upon a Time Thousands of Years Ago (Full Colour Edition)

As one of the two​ defining​ itihāsas of Bhārata​ – ​​the first and older one being Rāmāyaṇa – ​Mahābhārata has ​a grandeur that is unsurpassed and perennially ​unique. The multi-layered characters and plots, brilliantly portrayed by Veda Vyāsa, have continued to mesmerise millennia of generations. The lofty grandsire Bhīṣma, the boy-warrior Abhimanyu, the humiliated Draupadī, the self-blinded Gāndhārī, the fiery Droṇa, the righteous Pāṇḍavas and their very own cousins, the scheming Kauravas, their many family members, friends and allies, with the incidents that interweave their lives make for the physical body of the Mahābhārata. The eternal value of the work comes from the guiding wisdom of Śrī Kṛṣṇa.

This set of fifty stories is perhaps the first time that an attempt is made to focus on a psychology-based understanding of the stories, portraying the many characters of the Mahābhārata in varied situations. Along with the well-recognised Bhagavad Gīta, there are other sources of deep insight that are embedded within the Mahābhārata: Yakṣa Praśna, Vidura nīti and Bhīṣma Upadeśa - all the latter three have been touched upon in this book. This is also perhaps the first time that the IAST code of pronunciation has been used in a book of stories which is meant to help the readers, young and old, to grasp the Sanskrit pronunciation while reading in English.

The stories are written in simple language and in a concise manner, the aim being to drive the message through while at the same time leaving ample space to contemplate and introspect. The illustrations help to enliven the reader’s imagery while reading the stories. 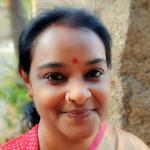 Yamuna is a Chennaiite whose childhood was without television and whose entertainment meant plenty of play, books and lots of stories. From a young age, she was innately attracted to the hoary Bhāratīya itihāsas and purāṇas. She cultivated fearlessness by reading the works of Swāmi Vivekānanda during her teen years.

She graduated in Chemical Engineering and worked as one for a while but realised that her strength lay in teaching and eventually moved to the field of education. Alongside, she used her flair for words to retell stories from our itihāsas and purāṇas, on temples and saints, on education and on Indian nationalism.

Yamuna’s intention is to bring the treasures of dharma in the language of the present urban elite that is getting enculturated as a consequence of its exclusive consumption of Western literature. Being a schoolteacher has helped her to understand the language of the young while keeping it interesting for the older reader too. Yamuna’s future books in this series will also be based on Bhāratīya itihāsas and purāṇas.