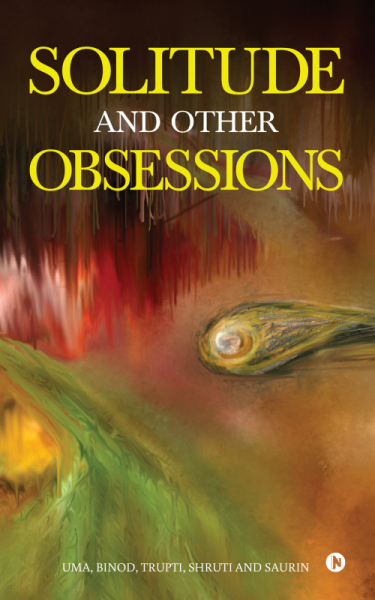 Solitude and Other Obsessions

We are a species fueled by obsessions. Every human achievement, and every infamy, is the result of an obsession that tormented, possessed and consumed. This is a selection of poetry about solitude and other obsessions that have distracted, driven, destroyed and / or defined us. Spanning genres, styles, emotions, time & place, these works by a collective of 5 poets are a glimpse into the obsessions that have become us.

Uma Sudhindra grew up in an army environment. After a decade-and-half of corporate life, she became an entrepreneur and has remained one. She loves books, music, travel & the Armed Forces. Her entrepreneurial venture Go Magic Trails reflects her passion for travel and experiencing the new & unique.

An alumnus of Fergusson College and JNU, she has been writing about international relations, political systems and the armed forces. She is currently researching for her first book, which is focused on the humane side of the Armed Forces.

Binod Kumar Panda is the classic mix of left-brain, right-brain. Gregarious and charming, he's an engineer and MBA with a hugely successful corporate, entrepreneurial and consulting career.

His school and college years though were spent in the company of solitude and like-minded friends that resulted in thought provoking poetry. This side of his got side-tracked as life took over but the influence of these formative years has not waned even after two decades and has helped him keep a balanced, go-giving life.

This is his first collection of poems to be published and he intends to start writing and publishing regularly from hereon.

Trupti Kalamdani is a mechanical engineer by profession who investigates stresses developed on an aircraft body at work; while at home, releases her stress by penning down a few lines.

She was born in Baroda, brought up in Mumbai, studied in England and has finally settled down in Bangalore.

Her tryst with poetry started during her school days, when she expressed her undying love for cricket in the form of a poem. Over the years, her limericks have grown into full bodied verses. A closet poet for years, she is finally out and exploring different platforms to share her work.

Her poems have been published in literary journals like efiction India, Taj Mahal Review and Coffee Shop Poems. She is also a regular performer at "Let Poetry Be" events at Atta Galatta.

Dr. Shruti Arabatti comes with a mature head over drooping arms and a mind ticking faster than an exploding bomb. Like her namesake, she is an orchestrated person living in a discordant cadence. She manages to hit all the right notes amidst all the gobbledygook yelping by her adorable preschooler. She's an Anaesthesiologist by profession, a writer by vocation and a juggler of all sorts on her personal front.

A voracious reader who devours books faster than her patients get back on their feet, she comes from a family who always believed that the pen is mightier than the sword and has penned down innumerable poems right from her childhood.

Saurin Desai’s first love led to a roaring affair that's ongoing now since nearly 30 years. At the innocent age of 8 he met a comic book that whacked him on the head (pun intended) and he fell heels-over-head, literally (pun not intended).

But being commitment-phobic, he had a couple of dalliances: with engineering, jobs & businesses, before succumbing to the seduction of the writer's life and giving up everything to become lazier than he ever was.

Through all of this he continued to rendezvous with poetry. And after one very, very, long pregnant pause, the poems that had owned him all these years recently agreed to stop possessing him and start haunting the world.