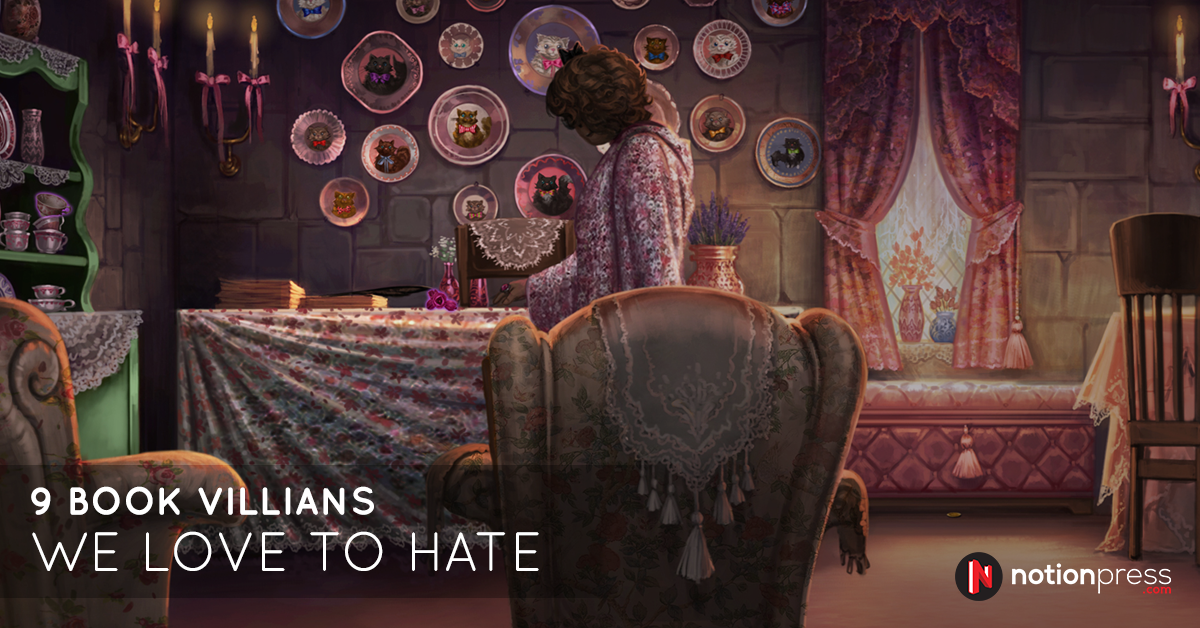 9 Book Villains We Love to Hate

Have you ever felt that you wanted to enter into the book that you are reading and kill that one character that has been snobby, annoying, and cold throughout? Yes, we have felt that way as well. From being a stone cold person to having evil motives against innocent souls, literary villains have been a pain not only to the protagonists but also to the readers.There are some really charismatic antagonists, like Bellatrix Lestrange, Damon Salvatore, Miranda Priestly, who despite being evil are too sophisticated for people to hate them. On the other hand, there are some villains on whom we would love to perform a Cruciatus Curse. Here is a list of 9 such book villains, from whom authors can draw an inspiration!

Most of us would have been unsure about whom we hate the most when we read the first book of the Harry Potter series  Severus Snape, Dursleys, or Voldemort. However, when we read the fifth book, it was clear that Dolores Umbridge is the worst of all villains the world has ever seen.

From being an evil professor, who didn’t teach what students have to learn during the dark times, to being a snobby tyrant, Dolores Umbridge gave us zillion reasons to hate her. She can give any dictator a run for his money.

Not only was she punishing Harry in the cruellest ways possible, but she even went to an extreme of making lives hell for half-breeds, Muggles, etc.

While Voldemort and Bellatrix were evil, Dolores took evilness to a new level altogether.

If you thought that literary villains these days are cruel and evil, you must read Othello. While the bard’s work is well-known for a lot of reasons, one of the most important grounds for anyone to read the book is to know how evil a person, Iago, can be.

The epitome of evilness, Iago goes to an extreme of making Othello murder his wife, Desdemona. While killing or torturing people is one kind of cruelty, making people lose trust on their beloved and in turn make them kill their own beloved is an altogether different level of sadism.

A typical example of how far a man who is driven by hatred can go in his life, Iago’s character makes you twitch in disgust.

Somehow, children’s books have the worst antagonists ever. If you thought that Dolores reminded you of every worst teacher you had in your school life, Miss. Trunchbull is twice as cruel and sadistic as Dolores.

A strong, muscular woman Agatha Trunchbull serves as the cruel headmistress in the school where Matilda studies. With so much hatred for children and her knack for giving worst punishments, Agatha keeps both teachers and students under her feet. She is also someone who took potentially fatal disciplinary activities of her school children.

One of the cruellest literary characters ever, Agatha is someone who can give shivers to any child who reads Matilda.

The first name that came to most people’s mind when we asked which literary villain you hate the most was The Darkling. For those who haven’t read the book series yet, Aleksander Morozova, popularly known as The Darkling, is the inexplicable force that leads the Grisha.

A classic example of looks can be deceiving; The Darkling is a tall, dark, handsome guy, who is capable of making anyone fall in love with him. However, as the story unveils, we realise how manipulative, two-faced, and power-hungry Aleksander is.

While we do most certainly hate him, we also can’t help but admire his personality, especially when he says the dialogue, The problem with wanting is that it makes us weak.

Well, despite being a protagonist, Scarlett somehow finds her way into the list of book villains we hate for she was not a typical female lead that any story would have. A vain, self-centred, and spoilt girl, Scarlett, despite being intelligent, is insecure at times.

With such an adorable look and cleverness, she still chose to fall in love with one man that she cannot have. When she understands the reality, she wants to destroy the love of her life by marrying his wife’s brother.

From rejecting a guy who loved her to stealing her own sister’s happy life, Scarlett was never happy and never let anyone else be happy. Finally, when she realises that nothing goes as per she likes, she runs back to that one guy who loved her only to hear, “Frankly, my dear, I don’t give a damn,” in return. Maybe, that’s what Karma is.

Another atypical protagonist who was the destroyer of his own life is Dorian Gray. A wealthy, handsome, narcissistic young man Dorian Gray gets obsessed by his own beauty and wishes to retain it forever.

As if being enthralled by hedonism and indulging in it wasn’t creepy enough, he doesn’t use his eternal youth for positive purposes. Just when you are mesmerised by his beauty that Oscar Wilde would have described brilliantly, you will end up hating Gray for his sinful behaviour.

The story is well-portrayed, especially for a tale that involves only a protagonist with negative shades and no other principal antagonists.

If you haven’t read this book yet, you must definitely read this one, just to fall in hate with Dorian Gray.

While he was a repeat character in most of Thomas Harris novels, his characterization in The Silence of the Lambs is enough to make us hate him. He was initially introduced as a forensic psychiatrist and cannibalistic serial killer in the book Red Dragon.

His character in Red Dragon as well as in The Silence of the Lambs is a complete sociopath. From torturing animals to killing people in gruesome ways, he makes us feel aversion towards his character.

As if his cruel attitude wasn’t enough, he has an eidetic memory, by which he can reconstruct every memory of his to gorgeous details. In short, Hannibal not only kills people but can also rerun the whole killing again and again and relish it. Ha! As much as we hate him, his characterization is an inspiration for budding writers, who are looking to create a villain that the whole world will hate.

The dialogues of all the books where Hannibal appears are written to perfection that just reading it will make shivers run down your spine. A classic example is when Hannibal says “On a related subject, Signore Pazzi, I must confess to you: I’m giving serious thought to eating your wife to Mr Pazzi.”

Charles Dickens is known to create greedy and cold-hearted characters. Be it Ebenezer or Bill, Charles Darwin’s characterization and narration make you feel an enormous amount of hatred toward his atypical protagonists.

Known to be one of the most vicious characters that Charles Darwin ever created, he is known to be the one who loves to control people. He is not only an expert when it comes to having power over somebody, but is also a professional in harming others. If sadism is your thing, then you might like him. Otherwise, in all forms of reality, he is one of the most hateable characters that we can ever come across.

In fact, Charles Dickens first description of Bill Sikes character itself is enough to make us hate him:

The man who growled out these words, was a stoutly-built fellow of about five-and-thirty, in a black velveteen coat, very soiled drab breeches, lace-up half boots, and grey cotton stockings which enclosed a bulky pair of legs, with large swelling calves the kind of legs, which in such costume, always look in an unfinished and incomplete state without a set of fetters to garnish them. He had a brown hat on his head, and a dirty belcher handkerchief round his neck: with the long frayed ends of which he smeared the beer from his face as he spoke. He disclosed, when he had done so, a broad heavy countenance with a beard of three weeks’ growth, and two scowling eyes; one of which displayed various parti-coloured symptoms of having been recently damaged by a blow.

What is it with vamps and stealing other people’s love interest? Well, if Scarlett seemed crazy to you, we don’t know what you can call Lucy. Despite appearing only for a short time in the novel, Lucy makes us hate her for life.

While Willoughby was more evil and annoying, his charm made us love him, and as the story moved towards the climax, his confession made us feel a little pity. However, Lucy Steele was one person who we can never sympathise or empathise with. From lying to creating misunderstandings between Edward and Elinor, she did every cheap thing that a person can do.

Didn’t you all have a sigh of relief when she was turned out of the house? Well, it was short-lived when she again entered the Ferrars household by marrying Robert Ferrars.

With Jane Austen’s brilliant story narration and characterization of Lucy Steele, we are bound to hate her more when we read the book than when we watch the movie.

These were some of the villains we love to hate to the core. In case, you are planning to write a book with a strong antagonist, reading these books can be really helpful. Who are the literary villains that you hate with all your life? Share the list with us on the comments section below.