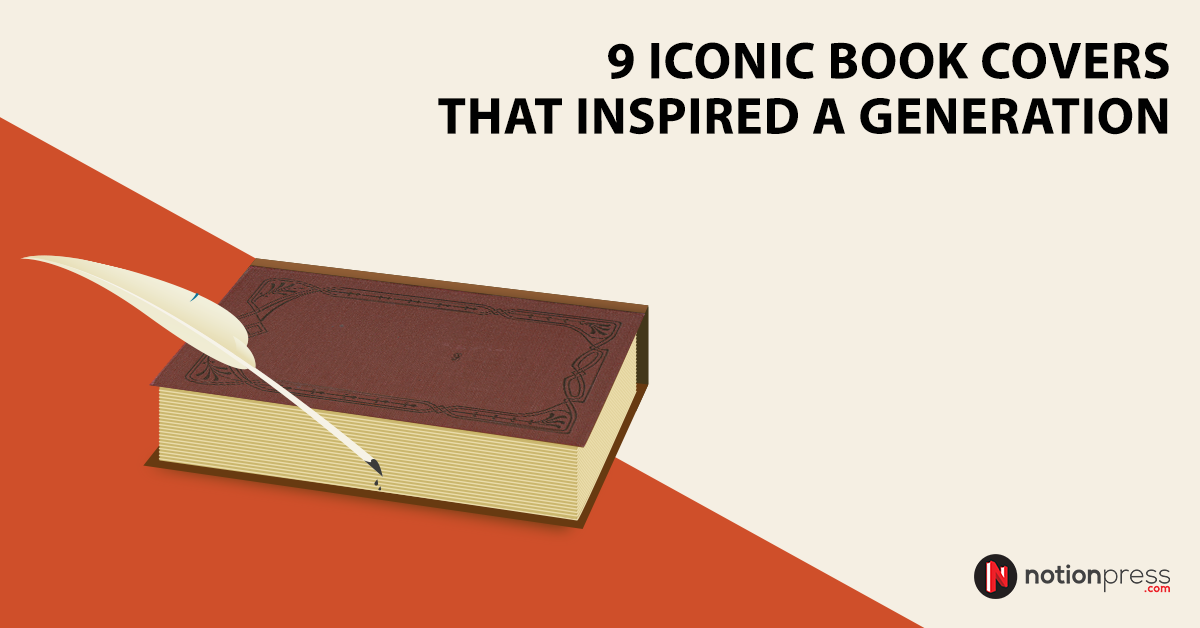 Never judge a book by its cover. This is a well known and often preached about proverb. While we may or may not follow this for deeper aspects, most of us are guilty of judging a book by its cover when we see it for the first time.When at a bookstore, most of us consciously or unconsciously single out books that have catchy covers, quirky titles and/or intriguing taglines. Books like these seem to call out to us. It is only through these external aesthetics that one is tempted to even pick up the book and glance over the book’s blurb. A book’s cover needs to not only grab the attention of the readers but also be a good expression of the book and its themes.We bring to you 9 iconic book covers that intrigued and inspired readers to go ahead and buy the book in order to satisfy their curiosity.

The engraving on the cover of Hobbes’ Leviathan is an iconic work of art known through the epochs of history. Written during the time when there was a battle for power between the parliament and Charles I, this cover managed to grab people’s attention as it has the figure of a supreme character governing over the world.

The towering figure of power is a depiction of Hobbes’ ideas in the novel. Throughout the book, Hobbes advocates the total control, which is to be held by an appointed leader, and this figure embodies that, as his arms and torso are made up of human beings. He is shown to be holding a crosier (a symbol of religious power) as well as a sword (symbol of human power). This interesting combination managed to grab attention and thus coercing people to give the book a read.

The title has a good deal of allure attached to it as well, as it is a reference to the biblical monster Leviathan. In this way, the cover manages to embody the contents of the book as well as invite attention owing to its contradictory imagery.

The original manuscript of Alice’s Adventures Undergroundas handwritten and illustrated by Charles Dodgson a.k.a Lewis Carroll, for Alice Liddell who was the inspiration for his story. However, when he decided to get his book published, he approached the illustrator John Tenniel to illustrate this classic for publication.

The cover was a picture of the infamous mad tea-party scene, which acts as a window to the theme of the entire novel. The cover shows Alice dining with a rabbit, a mouse and a funny-looking man. It has imbibed in itself the surreal and dream-like qualities that define the story. It personifies the confusion and mayhem through the story, and this not only fascinates and appeals to the imagination of children, but manages to intrigue adults enough to convince them to pick up the book. 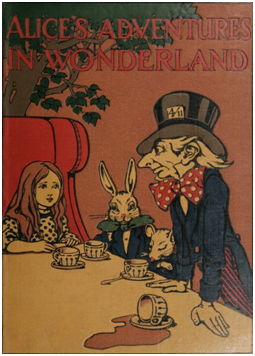 Originally meant to be a short novel, The Picture of Dorian Gray was revised to comprise 20 chapters instead of 13 due to the literary potential that the publisher saw in the book. The original cover was created by Charles Ricketts.

The cover is designed in such a way that it appears to be a blank canvas. Considering the fact that the title of the novel is The Picture of Dorian Gray, an observer assumes there will be a portrait on the cover of the novel. It is the absence of the obvious that appeals to an unknowing observer thus drawing them to the book.

This particular cover is in a sense the most powerful way to convey the depth of the story to an unsuspecting reader. Dorian Gray in the novel is a character who seems to change continuously through the narrative. At some points in the novel, he shows deep emotion and conscience, while on the other hand he attends a high society party barely 24 hours after committing a cold-blooded murder. Nobody knows who the real man is and the blank canvas on the book communicates this perfectly.

Additionally, the typically Victorian style handwriting that the title is illustrated in gives one the feeling of a conventional Victorian scenario before they have even begun to read the book.

Kafka’s metamorphosis is a thriller novella, where the lead character transforms into a monstrous insect. The book was originally written in German, titled Die Verwandlung. The cover of this German edition was the picture of a man who seemed to be losing himself and his sanity.

The cause for this anguish in the man is not depicted, which is a reflection of the actual story itself. Kafka shows Gregor Samsa’s transformation into this large insect but does not provide any explanation for this in the narrative. Seeing the cover, one will assume that this metamorphosis is something that the protagonist is undergoing internally, unsuspecting the actual physical transformation that he undergoes.

The open door adds to the allure of the cover, making an observer curious and tempted to read it. It also signifies concerns like mental pressure and madness that was growing around that time. In later translations of the text, the cover was changed to one depicting the picture of an insect despite the fact that Kafka was against this portrayal on the cover of the book.

Lee’s To Kill A Mockingbird is a bildungsromanhat intertwines themes of racial inequality, gender oppression and class struggles. The book cover is a beautiful conglomeration of all these themes despite the seeming simplicity of it.

The sketch, being greyish and colourless, brings into an observer’s mind a sense of sadness. This was done intentionally through the use of black and white imagery, as the book is based in the time of the Great Depression. It hence alerts the reader about the gloomy times, while also highlighting on the racial aspect of the book owing to the contrasting black and white used.

The class inequalities, which is a powerful theme running through the book, is also depicted in the cover with the way that a young child is shown to be looking up at a bird sitting proudly on the top most branch of a tree. Moreover, the barbed path the child is standing on allures the reader, and the very title of the novel makes it extremely inviting and appealing to a person looking at it for the first time.

Rushdie’s Booker prize winner was not only given credit for its beautiful story, but was also acknowledged for the creativity of its cover when it was being awarded the Booker of Bookers. This novel is a loose allegory for the post-independence events in India. Through the tale, there is a running theme of magical mysticism and the story also holds strong ties to the narratives in Arabian Nights.

The carefully designed cover brings out these motifs through its depiction of the Indian subcontinent as a human figure. It places emphasis on the magic and mysticism in the story as well, through the image of a crescent moon in the artistically portrayed night sky. The title adds to this appeal of the image and manages to convey the post-colonial nature of the novel through the word children which denotes the progress in time and generation. On the whole, this incredible image has a magnetism which draws a reader to pick up the novel.

The cover of Weisenberg’s book embodies the strong fashionista’s attitude that the story radiates. It depicts the power of a professional woman, while at the same time grabbing attention by emphasizing the link that the story has to popular fashion, using the term Prada.

At a time of a growing desire for women empowerment, this book cover contains all the elements of a perfect fun-read while also being and part of pop-culture. It successfully seeks to symbolize the thirst for professional power. The red in the picture is extremely captivating, as is the devilish appeal that it has owing to the devil’s tail that the woman is depicted to possess.

Niffenegger’s debut novel presents a story with a combination of two experiences “ the protagonist Clare’s frustration at having to wait for her husband Henry when he has gone time-travelling, and her adventures when she is alongside him during his time travel. The cover portrays both of this beautifully as it shows a woman standing next to a manâ’s shoes. She is both with him, and at the same time without.

It promises a new perspective to an interesting story as it gives one the allusion that the lead character will be the traveler’s wife and not hi thus going against the common convention of the lead character being the interesting one. It also gives the reader a notion that it strives for innovation in the sense that it is telling one the untold story of the character not mentioned in conventional fiction.

The picture on the cover is serene and beautiful, clueing in the observer to its romantic genre. It is also shown to be a little unfocused and unclear, giving it a dream-like and surreal feel.

This popular domino-effect book cover conveys a strong message regarding the story. The Book Thief revolves around the story of a ten-year-old girl, whose life in Germany has been affected by the death and destruction of World War II. Liesel learns to read and write and learns the power of language.

The book cover manages to convey the tone of death and destruction beautifully through the dominos. It also depicts the power held in that finger pointed at the dominos, thus communicating the power of writing and language. The overarching feel that the cover gives perfectly portrays the themes of mortality and power that the novel exuberates. It induces in an unsuspecting observer, a feeling of anticipation and thrill. This manages to create a sense of intrigue and excitement, making it hard to resist.

All of these aforementioned covers not only manage to successfully bring to light the theme and central idea of their respective stories, but also grab the reader’s attention. They persuade people to give the book a read, thus being a huge help in the marketing of the story. These images fit perfectly on the covers of the books, and also stand out as individual pieces of art that deserve credit and acknowledgement.