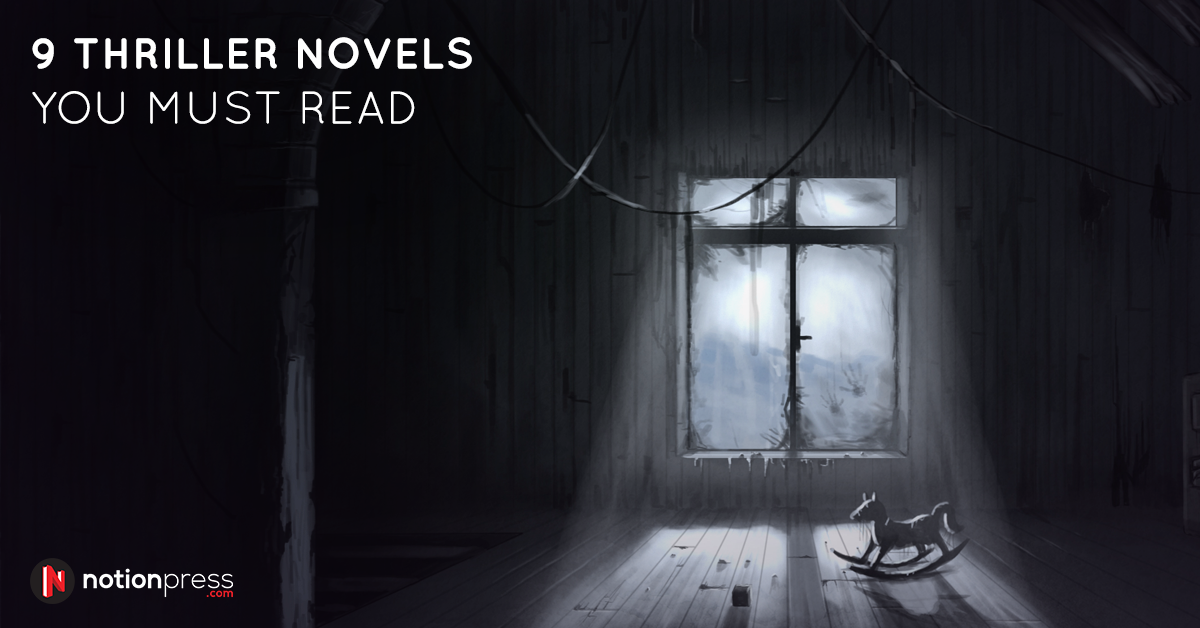 9 Thriller Novels You Must Read

Fiction novels have that innate ability to drag you into their world of fictitious reality. Every time you snug yourself in for a read, you get that tingling feeling of actually being inside the novel’s plot. Thriller novels are one of the most engaging reads; the numerous action set pieces, the glorious mix of drama and comedy and unexpected plot twists can keep you immersed all day long. If you’re in the mood for an adrenaline pumping dose of great reads, here’s our list of nine best thriller novels you must read.

Published in 2003, Dan Brown’s The Da Vinci Code is the second novel in his Robert Langdon series and by a long shot, is one of the most popular and controversial thriller novels ever to grace the palms of readers. Harvard University professor Robert Langdon is contacted by the French police to investigate the murder of Jacques Saunière, caretaker of the Louvre Museum. Langdon is accompanied by Sophie Marceau, the granddaughter of Saunière and together, they must race against time and fight off another cult before secrets of the Priori of Scion, an ancient society, are released to the world. Dan Brown’s impeccable levels of description, well-balanced pacing and fleshed out characters make you want to read this book again and again.

The book explores the life and lies involved in long-term relationships, especially a marriage. Published in 2012, Gone Girl tells the story in a broken perspective. Nick Dunn’s marriage to his wife Amy takes a turn for the worst when they both lose their jobs and re forced to move back to Nick’s hometown to take care of his ailing mother. The story follows the perspectives of both Nick and Amy, who begin to resent each other. The sheer complexity of the case leads it to become a media favourite, forcing Nick to tackle the press and the police as he uncovers shocking secrets about Amy. The book will have you guessing the outcome of every scene only to be taken aback by its plot twisting surprises. Gillian Flynn has adapted a bit of her real life experience when forming the characters of her novel.

Published in 1981, The Red Dragon is by far one of the most gripping crime thrillers ever written. It spawned one of the greatest villains of all time- Hannibal Lecter. A series of murders conducted by an individual known as the “tooth fairy” forces FBI agent Jack Crawford to contact Will Graham, a brilliant profiler who can recreate a crime scene. Graham notices a similar modus operandi to that of ex-serial killer Hannibal Lecter, and contacts him for help. Thomas Harris’ acute attention to detail and powerful narration lead to his book and its subsequent sequels becoming timeless classic thrillers.

A Time to Kill by John Grisham

A Time to Kill is John Grisham’s first novel, which he initially struggled to get published. He eventually got it published in 1989 but had to sell copies his book from the boot of his car. In a time when racial tensions were at a dangerously high level in America, an African-American girl is raped and assaulted by two white supremacists. The father of the girl swears revenge on the rapists and consults his lawyer whether he can get acquitted after killing them. Set in the backdrop of a nerve-racking courtroom drama, the story details how each character deals with themes of morality and oppression. Graham took inspiration from a real life incident concerning the rape of a 12-year-old girl. Graham was a witness during the girl’s testimony at a courthouse.

The Maltese Falcon by Dashiell Hammett

The Maltese Falcon is regarded as the novel that defined the crime thriller genre. Published in 1929, the book gained a cult following and eventually spawned four movies. The story begins with a woman entering Sam Spade’s office, asking for help in locating Floyd Thursby, a man she suspects ran away with her sister. Sam Spade asks his partner Miles Archer to conduct a quick scan of the last known location of Thursby. Spade also learns about the existence of a priceless artefact in the shape of a falcon, which becomes a major piece of evidence in solving the double murder. Dashiell Hammett used his experience as a Private Detective to write the novel, with his protagonist Sam Spade taking up characteristics of his own.

The Bone Collector by Jeffery Deaver

The Bone Collector is a 1999 psychological thriller novel. The story centres on the life of Lincoln Rhyme, a quadriplegic forensic criminalist who is ushered into solving a mysterious case. The murderer in question toys with Lincoln’s past (before he lost the use of his limbs). Investigations lead to Lincoln and his team discovering that the murderer is a copycat and is replicating the modus operandi of an infamous serial killer back in the late 90s, who called himself “The Bone Collector”. The novel is notable for its diverse range of characters and climactic plot twist. Jeffery Deaver comes from a very creative family, which is evident in his rambunctious writing style.

Stephen King broke the stereotype set on him with the release of Mr. Mercedes in 2014. The book tells the story of Detective Bill Hodges, who is forced out of his retirement when the news of a hit-and-run case emerges. It is soon found out that the man hind the wheel is a serial murderer and has cooked up a terrorist plot identifying himself as ‘Mr. Mercedes’. A citywide chase ensues, with Hodges and his team uncovering the identity and history of the Mr. Mercedes. Like most of his novels, this book was inspired by a real-life event- King spotted a woman driving her car straight into a McDonald’s restaurant!

If you haven’t read thriller novel before and are hoping to start sometime, we highly recommend starting with Lee Child’s novels. The author is a household name in the thriller genre and has proved it with his Jack Reacher novels. Published in 2010, 61 Hours is Child’s fourteenth Jack Reacher novel and is considered to be one of the finest pieces of action-packed thriller reads. Jack Reacher is left stranded inside a wrecked bus after it spins off the road and gets trapped in a snowy bank in Bolton. A gang of outlaw bikers begin causing chaos in the city after their leader is arrested on the charge of carrying drugs. Jack is tasked by the local police to protect the only witness, Janet Salter, against any threat to her life. Many thrills and spills drive the story forward, and it ends on a classic Lee Child cliff-hanger.

After seeing poor sales generate from his first book, Robin Cook did some research and found out that many first-time authors taste better success when they release a mystery or thriller novel. His conclusion- write a book that is both a mystery and a thriller and use the complex world of medical sciences as a background for the story. 23-year-old medical student Susan Wheeler works as a trainee in the Boston Memorial Hospital. She, along with four other students makes rounds every day regularly monitoring the conditions of ICU patients post treatment. Things take a turn for the worse when two patients mysteriously die despite showing a clean bill of health. Susan starts to investigate the matter and uncovers a plot that involves illegal organ trafficking. Coma went on to win many prestigious literary awards for Cook, including being named among the best books of 1977.

We hope this list of nine books will inspire you to write your very own thriller novel. Also, most of the books mentioned on the list have also been adapted into hugely successful movies. If you wish to one day see your book adapted into a movie, read our blog on how to convert your book into a movie script. Remember, no matter how well you write your book, your success as an author also depends on your marketing and publishing efforts. Getting your book published through a reputed self-publishing agency is the best way to begin your literary journey.