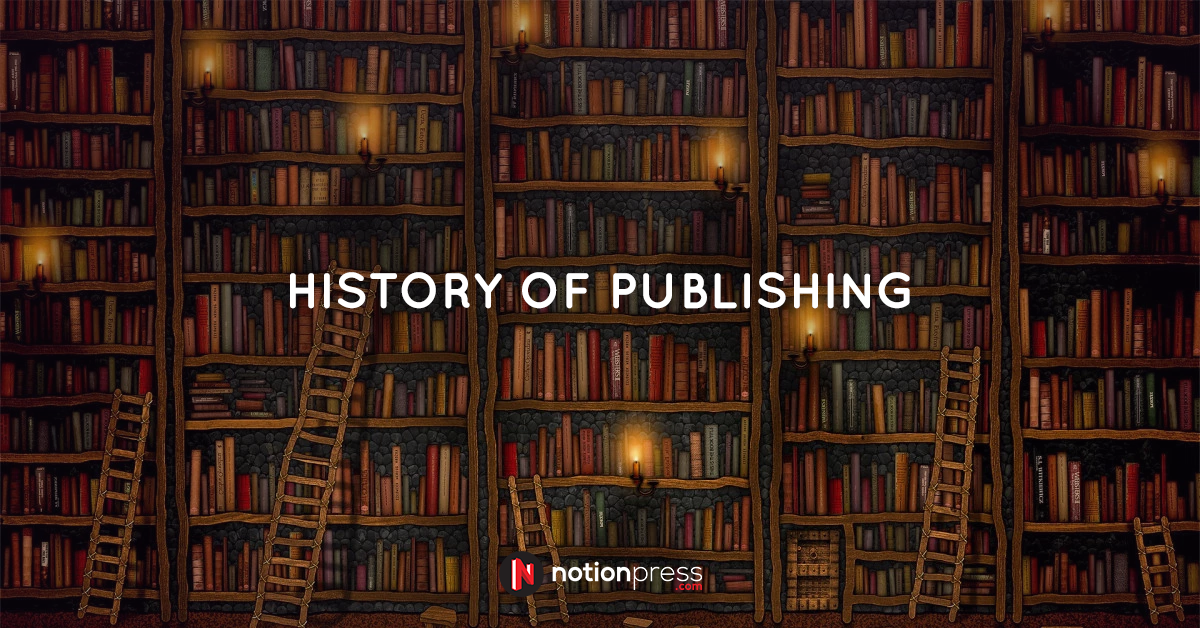 From clay tablets to audio books, the publishing industry has come a very long way. While books vs. eBooks continue to be the biggest debate among the bibliophiles, the book publishing medium as we know it is entirely different from the ones that were in place thousands of years ago. We now have access to millions of eBooks, with a single tap. Here is a compiled timeline on the history of book publishing, explaining how the industry has evolved over time since 3500 BC.

While we are currently reading our favourite novels in electronic tablets, in 3500 BC, people read through clay tablets. The history of using clay to publish writings and scriptures was first discovered in the city of Mesopotamia, where the Sumerian race concocted a writing style called cuneiform. The writers wrote on damp clay tablets and dried them in a kiln. The fire-drying procedure made the book durable and long lasting. This language and written form paved way to a lot of other written scripts in various countries like Korea, China, etc.

Most of us would have seen or heard about papyrus thanks to Dan Brown. While we cannot date back to a particular point in the history of when papyrus rolls were found, the oldest surviving papyrus scroll was from 2400 BC.

This scroll is made from the centre of the stem of the papyrus plant. The pith – centre of the stem – is cut into strips and glued together. Once dry, these glued strips can be used to write upon. Egyptians are known to be the pioneer of using this technique – the Greeks and the Romans followed eventually.

Around 600 BC, Mediterranean cultures slowly evolved to bring in a uniform writing system. Left to right system was used predominantly for most languages. Arabic and Hebrew were the exceptions that followed the right to left pattern. Before the development of this writing system, people wrote in all directions – left to right, up to down, right to left, and even down to up.

Somewhere between 500-200 BC, a thin material made of calves’, sheeps’, or goats’ skin was used to substitute Papyrus. It is said that a Greek historian named Herodotus was the first person to use these skins for writing. Gradually, parchment became the main writing material, and in fact, a library was set up with parchment writings by writers for the public to read.

Gradually, from parchments, book publishing moved to wooden tablets. These blocks of wood were coated with wax. A stylus was used to write on them, and the writings were erasable. The wooden tablets were all tied together with a cord. This kind of book was called codex. In fact, you can make your own even today!

Around 105 AD, the paper as we know it now was invented in China. Made of bark, mulberries, hemp, etc., the paper slowly replaced parchments and papyrus. After the invention of paper, people started writing on it using ink, one of the early writing tools. The paper leaves were then bound together using cords and ropes.

By 400 AD, illustrations were added to the stories written to add more insights to it. The paper quality was made better to withstand the colours and paints. These illustrated books were kept in libraries for public view and access.

Until 868 AD, the books published were all handwritten. Authors wrote 2-3 copies of the same book and kept it at the libraries. The publishing and distribution processes were quite straightforward. However, a technique known as block printing was found in 220 AD for printing on clothes. Gradually, this method was adapted to books as well. Blocks made of wood had letters and patterns that could be printed on paper.

The first ever moveable typewriter was found in early 1040 AD. Another Chinese invention, the moveable typewriter had all the letters and symbols placed on a wooden board. This method, however, seemed futile as the ink started to soak in the blocks.

However, by 1439 AD, the first working moveable typewriter was developed in Europe. This was made of metal symbols and letters with moveable hands. The books were typed using this machine and by the end of 1455 AD, led to the publishing of the Bible in form of a book made with papers.

It was in 1500 AD the printing revolution actually started. The printing press not only speeded up the book printing process, but it also reduced the production costs of books. The books were all the more affordable. At this juncture, various print materials, like newspapers, best seller novels, etc., were published.

As most of us know, the Cambridge University Press is one of the world’s oldest publishing houses. Founded by Henry VIII in 1534, it released the first print book in 1584. The other publishing houses that existed around this time are Schwabe Verlag in Switzerland and House of Elzevir.

The paperback books as we see it today – the crystal clear white paper – was found only in 1744 AD. A Swedish chemist, Carl Wilhelm Scheele, found that a chemical called chlorine can be used for bleaching of paper.

The book sleeves were primarily plain jackets that were used to cover books and protect them, and it was the same for almost 5-6 decades after that. Nowadays, many iconic book covers have been designed, and they are indeed inspiring.

From the mid-1500s, traditional publishing, as we call it today, started to flourish in Europe, USA, and various other countries. In this model, the publishing house buys the copyrights to an author’s work, prints, distributes, and sells it. A deal, i.e. royalty, is negotiated between the publishers and authors. The deal is generally a percentage of the overall sales.

In the 1800s, a lot of pirated content was published. Best-selling books from other countries were copied and sold across without due credits. This piracy and breach led to the enactment of the new copyrights law. Right now, the laws are quite strict and vary from country to country. However, their common goal is to protect the works of authors from piracy and plagiarism.

Self-publishing is a trending and efficient publishing model in the current times. However, the concept is nothing new to the field of literature. From Benjamin Franklin to William Blake, many authors in the past sold their books via self-publishing. In 1811, the literature queen Jane Austen herself took up vanity publishing for her novel Sense & Sensibility. More recent examples of a successful self-published novel are the contemporary trilogy – Fifty Shades of Grey by E.L. James and Martian by Andy Weir.

With readership for eBooks on the rise, many authors prefer to publish their work online as eBooks in Kindle these days. The process is simple, quick, and hassle-free. Known as Amazon’s Kindle Direct Publishing (KDP), Kindle publishing is well-received among readers as well as writers. Alternatively, you can have your books self-published electronically and have it printed-on-demand (POD).

Through ACX – Audible.com, an Amazon.com subsidiary, authors now publish audio books. These are nothing but the voice track of your novel. It can be a tedious process, but you will have fun doing it. Many youngsters prefer audiobooks to hear and cherish on the go.

Isn’t it amazing to see the way the book printing and publishing has transformed over time? With evolution of audiobooks and eBooks, reading on the go has become a lot easier. However, some people still prefer the smell of fresh books and the feel of holding a hardbound, leather-jacketed classic novel. Which kind of reader are you – the tech-savvy one or the quintessential one? Let us know in the comments below.