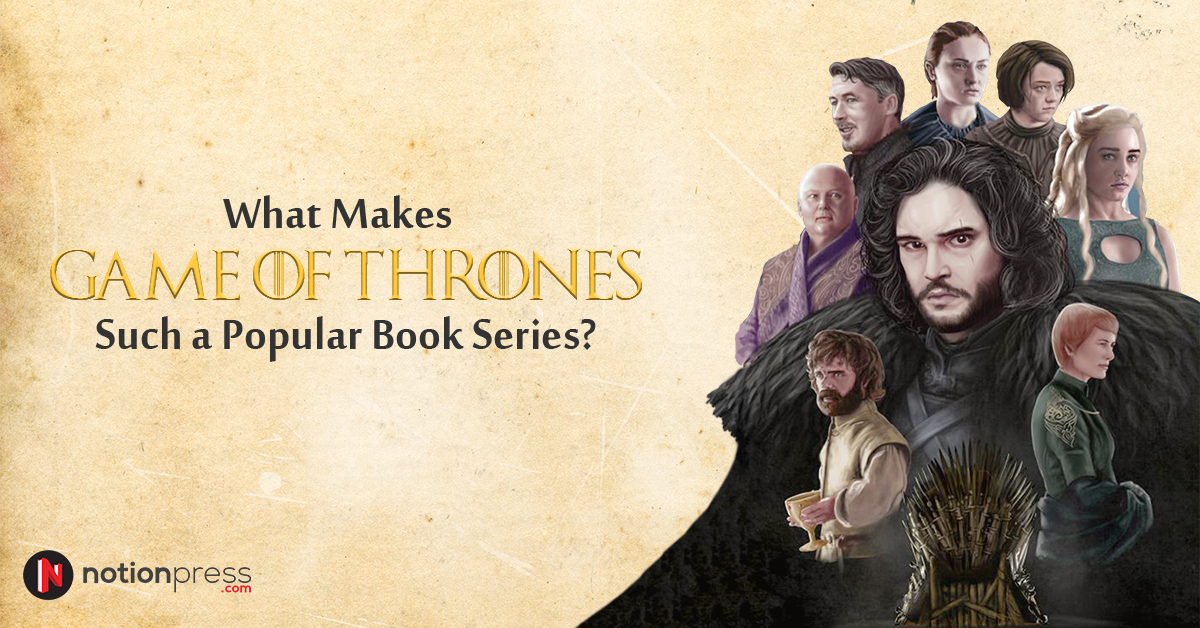 What Makes ‘A Game of Thrones’ Such a Popular Book Series?

What makes a book such a great read? When you sit back and relax with a novel and get so engrossed in it that you have forgotten how the day just went by. One such book that gives you this soul-stirring experience is A Game of Thrones series, authored by George RR Martin. Martin began writing the series in 1991 and published the first book in 1996. Since then, he has released five novels, with a sixth and seventh planned as well. Game of Thrones gained international recognition in a fairly short time, especially after the release of its adapted TV series. If you are planning to write a novel, taking a leaf out of Martin’s epic fantasy should be very useful. Writing a novel is a long, complex process that requires strategy, research and consistent effort. Writing a popular book series includes all of that effort and more. So, how did ‘A Game of Thrones’ manage to captivate readers and generate a massive, dedicated fan following? Let’s find out.

Unlike JK Rowling’s sudden flash of an idea that morphed into the brilliant Harry Potter series, George RR Martin took years to conceptualise Game of Thrones fully. In fact, he worked as a screenwriter before dabbling in the art of novel writing. Martin envisioned writing a novel of epic scale; one which was vastly different from the short scripts he was used to writing. Taking up this new challenge, Martin committed himself to writing an 800-page long manuscript; he would start writing at 10 in the morning, rehashing old content and forced himself to write even if he couldn’t think of anything creative.

Martin’s commitment to storytelling is evident in the narrative structure and plot of the book series, plus his stint as a screenwriter helped him understand characterisation and pacing better, which makes the series such an enthralling read.

The uniqueness of the GoT world

One of the biggest reasons why fantasy novels sell like candy is because of the vastly different worlds that authors create to pull the reader away from reality. GoT, however, did a double take on its readers by giving them a sense of realism deep within the fantasy elements. The realistic feeling is evident in practically every element of the book, and you can instantly visualise the story by picturing its setting — Westeros, a location that takes inspiration from Europe’s form factor. The plot’s main focus surrounds a structure called the Wall; reminiscent of the Great Wall of China.

Martin claims to have conjured up the GoT universe through daydreaming, and his best dreams came from that of historical settings. Martin chose the medieval era as the timeline for his novel as he felt that he would have more freedom to write fact within fiction and vice-versa due to the many myths and mysteries that already surrounded that era.

A plot boiling with suspense and surprise

Like its title, GoT plays out like a game of chess. Every move is unpredictable; every piece on the board is expendable and to the victor goes the spoils. Right from the first turn of the page, you are pulled into a world where you must always expect the unexpected. Martin has poured his heart out in the series, explaining each moment in each book with meticulous detail and heartfelt enthusiasm. The gritty realism of the medieval era is expressed in its full glory, with details regarding era-specific artifacts, tools and the livelihood of the people explained accurately.

One standout feature of the book is its ability to emotionally connect you with the characters. This emotional connect will ensure you are engrossed in the plot-line so deeply.

Combination of real-life and fictitious characters

While the book has mythical creatures like dragons and White Walkers, there are still characters that exist in true flesh and blood. Martin wrote his characters to feel real-world emotions and scenarios, albeit in a mythical environment. Feelings of anger, love, jealousy and hatred are explored predominantly with the struggle for power being the central focus of the book series.

Martin is not afraid to kill off many of his characters as death plays an important role in the series. There is no central character in the series; each chapter is told from the viewpoint of a particular character.

A diverse and complex story arch

If you’ve read the Harry Potter series or the Lord of the Rings series, you know just how much work goes into creating their respective worlds and connected stories. When reading GoT, you will be exposed to a world that is driven by its complex story structure. Each book in the series focusses on one key event along with subplots, which are interlinked with a perfect dose of hatred, love, jealousy and lust. Martin manages to keep his readers hooked by unimaginable twists and intricacies with references to the past and controversial glimpses of the future.

The brutally beautiful female leads depicted by Martin inspire the readers on women empowerment and the extent up to which a woman can go to save her kingdom and fight for her people. Whether it is Khaleesi’s kind-hearted nature or Cersei’s brutal and power-driven character, every female lead is a true inspiration.

George RR Martin is not afraid to add flavours of taboo topics like sex, violence, rape, and murder in his GoT book series. His decision to explore such themes stems from the fact that the setting is of historical significance; a time when law and order were controlled by monarchs. The characters are also not over-emphasised with distinctive traits; they are balanced on a morality grey scale, which humanises them to an extent that they have to choose a path of good or evil depending on the situation at hand.

Do you have a rough story concept that is capable of morphing into a book series? Contact Notion Press to get your journey as a self-published author started.